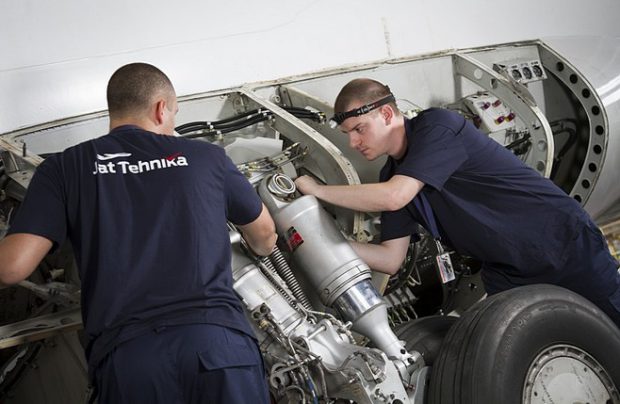 In the summer of 2019, Serbia’s ministry of economy put 99.3 per cent of Jat Tehnika up for sale (Jat Tehnika)

Serbian aircraft maintenance specialist Jat Tehnika is Europe’s first maintenance, repair and overhaul (MRO) organisation to win approval for the line and base maintenance of the Superjet 100 (SSJ100) aircraft. The approval may help to market and promote the Russian regional jet to potential European region customers.

The company, which is based at Belgrade’s Nikola Tesla airport (IATA: BEG), announced that it had secured EASA Part 145 approval for the type on November 12. The approval covers its Belgrade base and its line stations at other airports.

Miroslav Musulin, chief executive of Jat Tehnika, enthused: ”Jat Tehnika continues its strategic goal to be among the most advanced key MRO players in the market of state-of the art aircraft such as the Boeing MAX, the Airbus neo and [now] the Superjet 100.”

The official statement also reveals that the approval was achieved “with the support of SuperJet International in terms of necessary personnel training, spares and technical services. Russian Aviation Insider has been trying to contact Jat Tehnika for more details on the company’s plans for developing this part of its business. In the meantime, Stefano Marazzani, SuperJet International’s chief executive noted in a statement that the partnership with Jat Tehnika will “smooth the access to flexible maintenance services” for SSJ100 operators.

“This agreement confirms the SSJ100 programme’s commitment in providing its customers with an open market ‘ecosystem’ capable of offering a wide range of services directly,” Marazzani said, adding that the company is now confident that the European market for the regional jet “will recover.”

As of today, there is not a single commercial operator of the SSJ100 registered in Europe. The only serious interest came from Ireland’s CityJet, which wet-leased several of the aircraft to Belgium’s Brussels Airlines. According to the plane’s producer Sukhoi Civil Aircraft, CityJet organised in-house line maintenance for the servicing of its SSJ100 fleet.

Russia’s state-run aerospace and defence corporation Rostec, the parent of Sukhoi Civil, is still hoping to deliver Russian-made jets to European customers. There are rumours of negotiations with operators in Turkey and Norway. Having an EASA-approved MRO provider in Europe may positively influence their decisions.