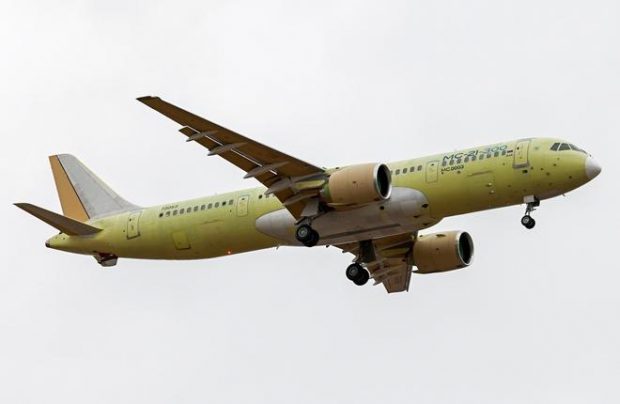 The second prototype of Russia’s new MC-21-300 airliner made its first flight in Irkutsk today (May 12), one year after the maiden flight of the first.

The latest derivative (registration number 73053) flew from the aerodrome of Irkut Corp’s production facility at Irkutsk, eastern Siberia. During the one-hour, seven-minute flight the aircraft climbed to an altitude of 3,000 metres and reached a speed of 400 km/h, Irkut Corp (a member of UAC) reports.

Today’s flight programme included an assessment of the aircraft’s stability and controllability under various wing configurations, with the retraction and extension of the landing gear, as well as the testing of on-board equipment.

The experimental flight, which was handled in normal mode by test pilots Vasily Sevastyanov and Andrey Voropayev, was a fully accomplished mission, according to Sevastyanov.

“The flight of the second aircraft is a significant milestone that will ensure the timely progression of flight certification tests,” states Denis Manturov, acting Minister of the Russian Federation’s Industry and Trade.

With the second prototype flying, there are now three MC-21-300s involved in the test programme: two of them flying, and one in static tests at Russia’s Central Aerohydrodynamic Institute (TsAGI).

“Three more prototypes are currently in production at the Irkutsk Aviation Plant. In parallel with the flight and static tests, active preparations are now being held for the deployment of serial production of the new airliner,” Manturov adds.

In the meantime, the first MC-21-300 prototype has been continuing its flight testing programme at the Gromov Flight Research Institute’s airfield at Zhukovsky, near Moscow. The aircraft has been undergoing rigorous testing for stability and controllability, the monitoring of its take-off and landing characteristics, the various modes of operation of its powerplants, including engine re-start in flight, and the characteristics of the aircraft during withdrawal from deep bank situations.

A large number of ground tests are due to be conducted within the test programme. Strength tests of the MC-21 are being carried out at TsAGI and the composite wing box tests, completed at the end of 2017, have already confirmed sufficient strength for flights operating on the limit. Tests of composite units of mechanisation have also confirmed their endurance at the maximum possible loads under the most aggressive of operating conditions.