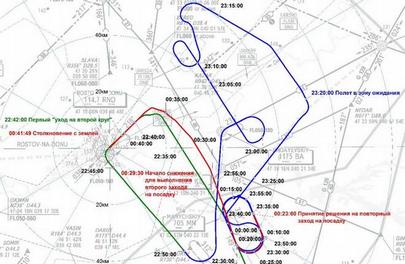 On April 20, the CIS-wide Interstate Aviation Committee (IAC) published a second interim report on the 19 March crash of flydubai Boeing 737-800 at Rostov-on-Don airport. This new report contains more detailed information on the crash, which killed all 62 people on board, than the first one did. Neither document mentions any technical malfunctions.

The new report reads that the forecast and actual weather situation along the Dubai – Rostov-on-Don route and at destination was favorable enough for the flight. The aircraft’s weight and balance were within the limits.

The aircraft departed Dubai at 18:37 (all times in the article are denoted in UTC, which is three hours behind the time at the flight’s destination) on March 18. At 22:42, while descending to land on Runway 220 at Rostov-on-Don, the crew reported a windshear alert and initiated a go-around procedure. The aircraft first climbed to FL50 (1,500 m), then to FL80 (2,450 m), after which the crew reported light icing and requested permission to climb to FL150 (4,550 m).

The airliner spent some 40 minutes in a holding pattern. At 00:23, the crew requested and were granted permission to make another attempt at landing. As the aircraft descended through 600 m, the crew disengaged the autopilot and autothrottle. On reaching 220 m, while 4.5 km away from the runway threshold, the crew decided to initiate another go-around. The IAC believes the decision was prompted by a sharp increase in the indicated wind speed, which grew 20 kt (10.3 m/sec) to 176 kt (90.5 m/sec) in just 3 seconds.

The crew initiated a climb at a rate of 20 m/sec, with the engines at the maximum take-off setting and flaps at 15°. At approximately 600 m above the ground, with a pitch angle of around 18°, the captain pulled the steering column, decreasing the climb rate and increasing the horizontal speed, which resulted in the flaps automatically retracting to 10°.

The engine thrust was then slightly reduced, causing the flaps to deploy back to 15°. However, three seconds later the crew set the engines back to take-off mode, after which the flaps once again retracted to 10° and remained in this position until impact.

On restoring airspeed the captain pulled the steering column, thus increasing the climb rate. However, at an altitude of around 900 m, the crew reset the horizontal stabilizer pitch 5 degrees from -2.5° (nose-up) to +2.5° (nose-down). According to the IAC, data recovered from the flight data recorder and the cockpit voice recorder indicates that the stabilizer pitch was reset with the use of the trim wheel on the central instrument panel.

As a result, the aircraft, which had by then climbed to 1,000 m, entered a sharp descent from which the crew were unable to recover. The airliner made impact with the ground at a speed of over 600 km/h and at a bank angle exceeding 50°.

The report also contains information about the aircraft’s technical condition and about the flight crew. The airliner (registration no. A6-FDN, serial no. 40241) was rolled out on January 19, 2011. Since the beginning of commercial operations, it had accumulated 21,252 flight hours and performed 9,420 landings. No heavy maintenance forms had been performed on the aircraft.

The captain’s aggregate time flying stood at 5,961 hours, of which he had spent 4,905 hours flying Boeing 737-800s, including 1,056 hours as captain. The first officer had flown 5,767 hours, including 1,100 hours on Boeing 737-800s. The report says that information about the flight crew’s psycho-emotional and physical condition is not yet available.

All the navigation, landing, ATC and communications equipment was functioning normally prior to the crash. The condition of the aircraft’s flight control system, including that of the stabilizer controls, has yet to be established. The IAC report also reads that the transcripts of the crew’s radio exchange have to be translated from English and Spanish to Russian before they can be analyzed.

The IAC recommends that operators refresh their flight crew’s knowledge of the manual go-around procedure in various conditions at low all-up weights, and to include elements of this procedure in the full-flight simulator training syllabi. In addition, the IAC advises carriers to review the recommendations it issued in the aftermath of two similar accidents: the one involving a Tatarstan Boeing 737-500 in Kazan in 2013, and the 2006 crash of an Armavia Airbus A320 in Sochi. In both instances, the board of inquiry identified human factor as the cause of the accident.