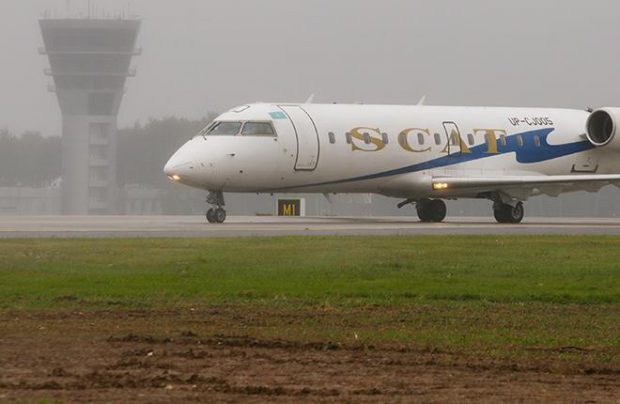 The Kazakh carrier has up to now operated services to Domodedovo (Leonid Faerberg / Transport-Photo.com)

Kazakhstan’s SCAT Airlines is in the process of switching the destination airport for its three Moscow services from Domodedovo to Vnukovo. The carrier performed its first flight into Vnukovo from Aktobe on September 6. By October 29, it will have similarly changed the Moscow destination for its other two routes, from Shymkent and Aktau.

“This is our 20th year in operation, and we are currently working to develop\ our route network,” SCAT Vice-President Marketing Alexandra Sytnik told Russian Aviation Insider. “At the current stage, we find that Vnukovo offers convenient maintenance options, an appealing price policy, and a chance of concluding agreements with other airlines. We have also received multiple requests from passengers to transfer to Vnukovo, which is located closer to the city and offers connection flights that are interesting to them.”

Sytnik added that moving to Vnukovo should help the carrier keep its current prices despite the weaking Kazakhstani currency.

SCAT is the first Kazakh airline to launch flights to Vnukovo. The Russian capital city\ is a key destination for the airline, which expects traffic on its Moscow routes to grow further. In the first seven months of 2017 the figure stood at 33,800 passengers. up 16.5% year-on-year.

The carrier also plans to develop its route network through interline, code-sharing, and special prorate agreements. “We believe that Vnukovo will help us with this,” Sytnik announced at the inauguration news conference for the Aktobe-Moscow route. “We will thus offer a great network of connection flights to Kazakh citizens, whereas Russian citizens will avail of our domestic route network, which is the most extensive in Kazakhstan. This will give travelers the possibility to reach the farther corners of our country.”

Sytnik told Russian Aviation Insider that SCAT is currently negotiating a possible interline and special prorate agreement, complete with full baggage transfer, with Russia’s UTair Aviation. The latter uses Vnukovo as one of its bases, and performs about 160 flights per day from there.

SCAT Airlines currently operates 45 domestic and 22 international routes. Its international destinations are in CIS countries and Georgia, as well as in China and Turkey. The airline offers routes to several Russian cities other than Moscow, including Astrakhan, Krasnodar, Sochi, Makhachkala, Mineralnye Vody, and Kazan.

At present, SCAT is not allowed to operate flights between Moscow and Kazakhstan’s two largest cities, Astana and Almaty: the current intergovernmental agreements permits the two countries to designate only one operator each for these routes. For the same reasons, Sytnik told Russian Aviation Insider, the carrier cannot fly from Astana to Zhukovsky, another airport serving Moscow. The airline believes that Zhukovsky “offers great potential for cargo transportation.”

The carrier is considering launching flights to Russia’s Orenburg, Chelyabinsk and St. Petersburg, and might relaunch operations to Novosibirsk, Rostov-on-Don, and Tomsk.