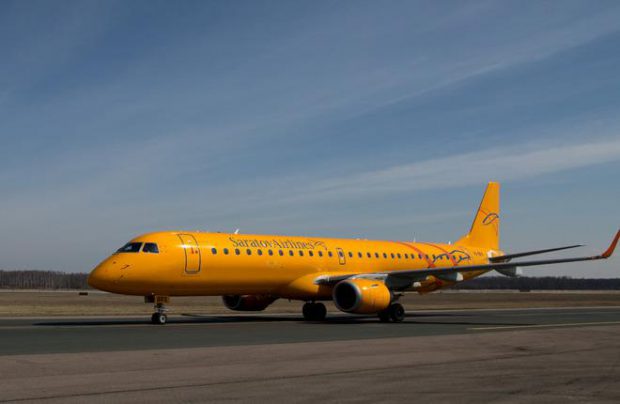 In June 2017 Russia’s Saratov Airlines led the world in Embraer ERJ190 narrowbody family daily utulizaton rate, the carrier reports citing data from the aircraft’s OEM. Each of Saratov Airlines’ E195s (ERJ190-200) spent on average 12.11 hours in the air daily, which is a record for the operator too.

The last peak season for Saratov’s ERJ190s was reported last summer. In August 2016 E195s flew on average 10.11 hours per day, which made the airline fourth in the global rating, whereas Air Moldova topped the list with 15.18 hours per day. This year Moldovan carrier resulted second, having reduced its average flight time to 11.71 hours.

Commenting on June results Saratov Airlines emphasized that “efficient and non-stop operation of aircraft is only possible by a concerted effort of all departments within the airline, provided that maintenance is timely and professional, and that the fleet’s dispatch reliability is maintained at the highest level.”

Last year the airline’s quality director Yuriy Prigorodov also highlighted the importance of ground staff’s efficiency. He also mentioned that exceeding 12 hours a day was a true challenge. “To log more than 12 hours on average requires careful planning to make sure that no significant checks, even A-checks or service bulletins, or airworthiness directives or modifications are planned for this period.”

Saratov Airlines has been operating a pair of E195s since 2013. There are no other operators of the type in Russia.