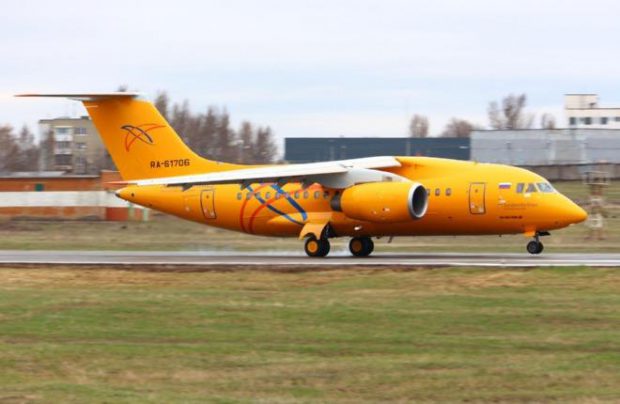 Saratov Airlines has taken final delivery in a batch of An-148-100B regional jetliners subleased from Rossiya Airlines. The contract between the two carriers and the owner of the aircraft, Ilyushin Finance Co, was signed last year.

The airline’s management expects this summer’s traffic to justify the An-148 lease move.

The latest An-148-100B, tail number RA-61706 (serial number 02-07), built by Voronezh Aircraft Production Association (VASO) in 2010, was ferried from St. Petersburg to Voronezh on March 17. One month later, VASO deivered the newly outfitted and suitably liveried aircraft to Saratov Airlines. The airliner’s first revenue flight, on April 19, was from Saratov to St. Petersburg.

With RA-61706 factored in, Saratov Airlines now has four 83-seat An-148-100Bs in its fleet (the other three have registration codes RA-61703, RA-61704, and RA-61705). One more of the type (tail number RA-61701) was ferried to Saratov directly from Pulkovo outside the schedule. It is now being used as the part donor for its siblings, and could be restored to flying condition at a later date but the airline is unclear on when that might happen.

Saratov Airlines launched An-148 commercial operations in December last year. The carrier currently bases two of the type fleet (RA-61703 and RA-61705) at Krasnoyarsk, and has opened a dedicated line station for the type. The aircraft are used for transporting shift workers to oil and gas fields, as well as for developing the airline’s route network across Siberia and the Far East.

The remaining An-148s, RA-61704 and RA-61706, operate routes in the European part of Russia. The carrier’s main base at Saratov, which features a full-scale MRO facility qualified on the type, Saratov avails of a secondary An-148-100B-cleared facility at Penza airport. One more station meeting he requirements, located at St. Petersburg’s Pulkovo, operates under Saratov Airlines’ FAP-285 approval. It is, however, primarily focused on maintaining the airworthiness of the An-148 with tail number RA-61702, the only example of the type still operated by Rossiya Airlines.

Saratov General Director Alexey Vakhromeyev told Russian Aviation Insider in March this year that, even though the carrier had not yet accumulated much exerience on the type, he was delighted with the “great attitude towards these aircraft”: “We experienced some difficulties in the beginning, but we were treated very nicely by everyone, [including] Angara Airlines [operates five An-148-100Es], [designer] Antonov State Enterprise and, of course, VASO the airframer.” Vakhromeyev says the An-148 project cannot yet qualify as being “commercially viable”.

“I think that we will only be able to provide some kind of commercial assessment of this project in about a year’s time,” he says. “Our traffic is distinctly seasonal, and is therefore impossible to judge by the low winter season. Once we start massive summer flights, we will see whether our hopes are justified. Our intention for these aircraft was to fly passengers between regional centers and to holiday destinations in the south of Russia. We do realize that we can hardly generate any significant traffic in Russian regions during the winter months, except maybe to Moscow and St. Petersburg.”

The airline expects to fly its An-148-100Bs for an average of at least 200 hours per airframe per month throughout the year. “We would of course prefer to clock 300 or even 400 hours [per airframe], but can the aircraft really take that?” Vakhromeyev muses. “To a certain extent this depends on our maintenance and commercial divisions. But we do pin high hopes on our An-148s. I think we will reach 200 hours per month [per airframe] in the summer season; in fact, we are prepared to exceed that figure. We cannot achieve this just by flying shift workers around though. We have started putting these aircraft on our regular schedule, so the total flight time will go up.”

Along with the An-148s, Saratov Airlines lists two Embraer E195s and five Yakovlev Yak-42Ds on its certificate. The Yakovlevs are growing increasingly obsolete, so the An-148s are partially intended to replace these.

The carrier is quite content with its Embraer E195, and considers them as the mainstay of its fleet. Vakhromeyev points out that the An-148 lease does not rule out further procurement from outsiode the post-Soviet space: “We continue to consider opportunities and monitor the market. Fleet replacement is a continuous process, but we are aware of the fact that the An-148 has its limitations: even if we asked the OEM for more aircraft they would not be able to deliver them. So we have to look for alternatives.”