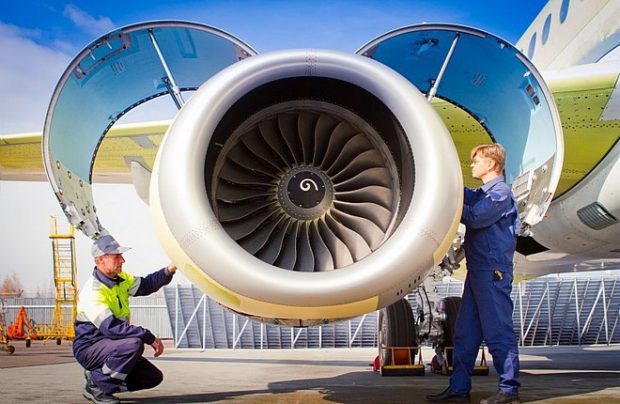 The PowerJet SaM146, engine that powers the Sukhoi Superjet 100 regional jet (SSJ 100), has surpassed the mark of 830,000 flight hours, according to Russia’s NPO Saturn, which produces the powerplants jointly with France’s Safran Aircraft Engines within PowerJet joint venture.

This milestone happened in March 2018, almost 7 years after the first operation of the SaM146-powerered SSJ 100.

The engines operated under extreme climate conditions continue to demonstrate the highest flight time. The maximum figure, more than 8,800 hours is attributed to SaM146 operated by Yakutia Airlines, which flies in Russia’s Far North. The maximum number of cycles, more than 6,700, was demonstrated by the engine, which powers the aircraft flown by the Mexican LLC Interjet, which operates its aircraft in hot, humid and high conditions.

As of March, 310 serial production engines were dispatched, according to NPO Saturn, which is responsible for final engine assembly. A record seventy six SaM146s were delivered in 2017.

Since starting revenue service in 2011 with SSJ100, its only application so far, the SaM146 has demonstrated dispatch reliability rate of 99.9% under intensive operating conditions and in a wide range of environments, says manufacturer.

The SaM146 engine is believed to might soon find another platform. It may be officially selected as soon as this May by Russia’s Beriev to power its Be-200 amphibious jets. According to industry sources, the agreement between PowerJet’s Russian and French partners, giving green light to the program, may be signed during St. Petersburg Economic Forum in May.

Within PowerJet, NPO Saturn develops the fan module, the low-pressure compressor and turbine and is responsible for final engine assembly and ground tests in its facility in Rybinsk, Russia. Safran Aircraft Engines (formerly Snecma) develops the high-pressure core, the accessory gearbox, and the control system. The French company is also responsible for propulsion system integration and flight tests.

The PowerJet MRO network includes two certified shops, one in Saint-Quentin-en-Yvelines near Paris, and one in Rybinsk, Russia.