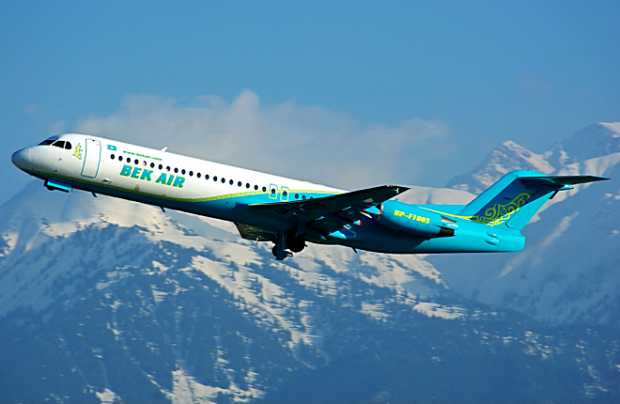 The Civil Aviation Administration of Kazakhstan (CAAKZ) has identified a number of safety violations after an inspection of Bek Air’s operations following its Fokker 100 crash in Almaty in December.

The most serious findings are associated with the continued airworthiness standards of the airline’s fleet of Fokker 100s. Before the Almaty crash, Bek Air operated nine regional jets of the type, with ages ranging between 24 and 30 years. CAAKZ’s main criticism concerns the airline’s failure to maintain the appropriate maintenance logs. The airline has been systematically replacing expired components with parts taken from other aircraft in its fleet, supposedly because of problems in acquiring spare parts for an aircraft type that has been out of production since 1997. As a result, it has become very challenging to track the actual service history of some critical components. The airline was also found to have removed metal shields containing the serial numbers on several Rolls-Royce engines in its fleet, making it impossible to identify these engines’ actual flight hours or cycles. Rolls-Royce has confirmed to the Kazakh authorities that it has no data on these engines’ last overhauls, and that there are no maintenance procedures that require the removal of serial number shields.

Meanwhile, CCTV streams from Almaty airport have revealed that Bek Air’s flight crews failed to perform adequate pre-flight visual inspections of wing leading edges, a process which is prescribed by the Fokker 100 flight crew operations manual (FCOM). The wing leading edge de-icing procedure was introduced as an airworthiness directive (AD) in the aftermath of a Fokker 100 crash in Skopje, Macedonia in 1993. The procedure requires the leading edge to be manually checked for ice build-up. Bek Air’s crew training programmes provide no evidence that flight crews had been adequately instructed in recognising and avoiding risks associated with wing icing.

As for now, the currently grounded regional Kazakh airline remains under the tightened scrutiny of the country’s oversight authorities and it has been granted a six-month grace period to eliminate the safety shortcomings, or have its air operator’s certificate withdrawn.

In the meantime, International Air Transport Association (IATA) has recalled Bek Air’s Z9 designator code on January 17, but says it may be reassigned to the airline within the 60-day period on verification of eligibility. Bek Air has appealed the suspension.