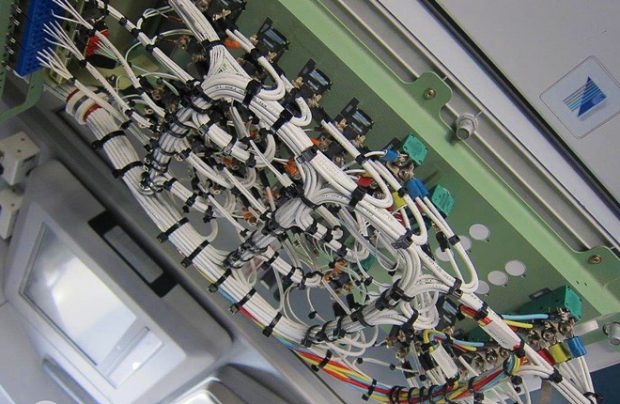 34 Aeroflot’s Airbus A320s have undergone the first stage of retrofitting, which included installation of modules for distributing information from the on-board server and all necessary wiring (S7T)

S7 Technics has added the installation of Wi-Fi modules to its capability menu of aircraft services. Russia’s independent maintenance, repair and overhaul (MRO) provider has entered a developing market to meet the growing needs of airlines in upgrading their aircraft with internet access.

In the course of preparation for the first project that was launched with one of its strategic customers last year, specialists from Moscow‘s S7 Technics Domodedovo airport base visited the Czech Republic facilities of JOB AIR Technic, which has extensive expertise in such modifications.

Having learned from the experience of their Czech counterparts, S7 Technics specialists, together with a project developer organization, have installed Wi-Fi modules on part of Aeroflot’s narrow-body fleet.

The retrofitting is divided into two stages: firstly, modules for distributing information from the on-board server and all necessary wiring are installed, then, secondly, the aircraft are equipped with external internet communication modules to connect to passengers’ personal devices.

From March of last year until September 2019, 34 Airbus A320s have undergone the first stage of retrofitting and S7 Technics is now planning to carry out the second retrofitting stage on 26 Aeroflot aircraft during 2020.

“Aeroflot expands capability of its in-flight entertainment (IFE), based on passengers’ needs. The introduction of such services is a global trend. There is a growing passenger demand for onboard Internet services. Our response to customer wishes is a gradual implementation of wireless Internet access across our entire fleet,” explains Kirill Bogdanov, deputy CEO for IT at Aeroflot.

As a result, all Aeroflot’s long-range aircraft are already fitted with wireless Internet access. In the mid-haul sector, 62 A320s are equipped with a free IFE, and passengers can connect to multimedia content uploaded to the on-board server from any mobile device during the flight. ‘Internet on board’ service, which provides Wi-Fi Internet access during the flight, will be available on these aircraft next year, Bogdanov promised.

Moscow’s S7 Technics specialists have performed all the work on retrofitting the aircraft under the company’s EASA Part 145 certificate. Three avionics experts, three structural repair specialists, a structural engineer, and logistics and technological support engineers were all involved in the work. Interiors staff were also involved to ensure easy access to places where modifications were being made.

“New technologies and passengers’ needs will drive the implementation of internet access services on board. Some air carriers, for example in the USA, already offer passengers their choice of on-board internet provider, which means that access to the worldwide web from the sky has become simple, mundane, and even an obligatory attribute of a modern airline,” observes Oleg Glukhov, Moscow’s S7 Technics base deputy production manager.

“Over time, it will come to Russia and neighbouring countries as well. Therefore, we consider that retrofitting aircraft with Wi-Fi modules is a promising prospect in the very near future. Some of Russia’s airlines are already actively working on this issue and plan to equip their aircraft with internet access points in the near future,” Glukhov adds.