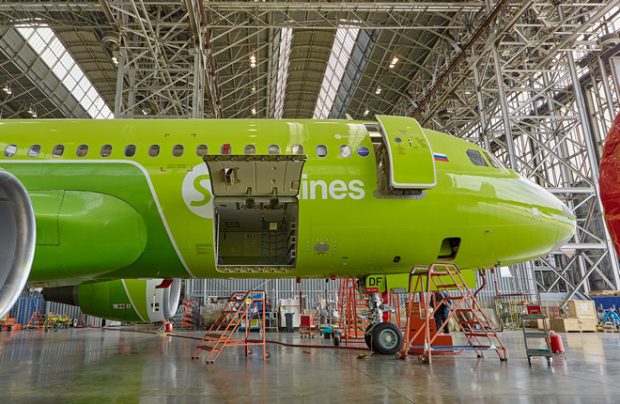 S7 Technics among the first MRO organizations in Russia started offering redelivery checks several years ago as a comprehensive one-stop-shop service. Redelivery check is required when an aircraft is returned to its lessor or is handed off to the next operator.

Redelivery checks are specific in a way that besides the continued airworthiness routine and lifecycle management, it is vital to ensure compliance of both the aircraft’s physical condition and all of its logbooks with the lessor’s requirements and terms of the leasing contract.

The service proved quite popular, with its value increased dramatically when the pandemic hit. In 2020 Russian airlines’ fleet utilization rates plunged, as a result a number of aircraft being returned to their lessors or changed hands. So the bulk of S7 Technics’ operations in 2020 and throughout 2021 was associated with redelivery checks.

What changes did the pandemic bring to the company’s redelivery operations?

LS: Well, the pandemic certainly posed new challenges. To begin with, the number of such projects increased – within a year we successfully completed over 15 redeliveries for various customers. And another factor was that demand for aircraft in the secondary market decreased sharply. Demand collapsed in general, but if someone leased or purchased aircraft at all, those were mostly new aircraft. And that had an impact on redelivery projects, in a way that lessors pressed by the new market realities changed their approaches to redelivery checks. The aircraft acceptance procedure became much more rigorous than in case when the aircraft would have been handed off to the next customer. It soon became obvious that lessors approach each redelivery project very individually, and that affected our planning. Sometimes we would redeliver an aircraft or two under a certain set of requirements, but that same lessor would later “change hats” and come up with new, more stringent, standards. This affected projects both time and cost-wise.

At present, there are no common standards for redelivery requirements. So we, in cooperation with other airlines and maintenance organizations, and also within the framework of IATA work groups, are pushing for common industry standards to be accepted by all parties.

Restrictions on in-person communication became a serious issue. The pandemic cut cross-border movement of people globally, all communications went online. But there’s a range of issues, which can hardly be resolved this way, when the customer has no physical access to the aircraft or the component that needs inspections, video streaming just doesn’t provide the complete picture. Restrictions in communications resulted in complications in understanding between people, it was a problem.

Another challenge was degraded quality of aftersales support from airframers and OEMs, as many of them were forced to reduce their workforce. It took longer and harder to get an adequate response – and when it comes to redelivery checks, everything depends on efficient communications with OEMs. So all stakeholders were struggling with losses and extended lead time. Supply chains and logistics were also crippled causing disruptions and delays.

How does this grounding translate into figures?

LS: Whilst in the previous years redelivery checks on narrowbody aircraft took between 30 and 80 days, in the pandemic period that time stretched to 120-240 days, and one aircraft was grounded for 311 days! Aircraft occupied hangar space for much longer than before, and hangar space is an MRO’s most vital asset.

How did you cope with all these issues?

LS: We had to do many things. For one, reorganize communications between all parties involved, engage operators, lessors and suppliers into one circuit, and we did that on a regular basis. It didn’t all fall together on one click, but gradually it evolved into a whole system of efficient communications. We managed to get our concerns over support setbacks across to OEMs, and they took corrective measures and now continue to focus on support.

Besides, we identified and analyzed common problematic trends that manifested throughout projects and developed a standard solution to combat them. For instance, here’s how we fixed the OEM support deficiencies: we standardized our technical inquiry form to make the data from our side so comprehensive that it could not be misunderstood by an OEM specialist of any level of competence, and this really helped reduce the time and volume of required exchange.

Redelivery projects are indeed quite different from scheduled maintenance, they have a whole range of particularities. We learned how our foreign peers organized these processes and we concluded that it is a distinct type of operation, which should be managed by a separate department, dedicated to redelivery and acceptance procedures. So we created such a division, focused on analyzing the details of each particular leasing agreement, and on setting the stage for leasing projects, and all that.

During the pandemic it became vital to set up an efficient exchange of large volumes of data both with lessors and airlines. We achieved that through cloud IT-services, which enabled us to switch workflow to a completely electronic format. The next stage is a level-up of our RMS (record management system). We are working this out with software developers and I think by year-end we’ll make the decision on upgrading our RMS and implementing new generation technology, capable of integrating with IT systems of all parties involved.

Along with addressing some administrative measures, you must’ve searched for new solutions in aircraft and engine MRO?

LS: Right. As a maintenance organization we have this capability, unique for the Russian market, to perform repairs on CFM56 engines, which we plan to extend to other engine types as well as APUs. We have summoned a unique team of experts. As I mentioned earlier, it is the physical condition of engines, as well as their maintenance records, which resulted among the primary causes of delays, so we engage our engine maintenance specialists in redelivery projects. Their capabilities and competencies enable certain maintenance operations to be carried out without removing the engines from wing. If we didn’t have such capabilities, we would have to remove the engines and ship them to foreign shops for maintenance and repairs, which would greatly affect both the costs and the lead time.

Another area, which required special attention is structural repairs, where the bulk of work is associated with accurate filing of technical documentation.

In redelivery projects we often square off against requirements of the vast majority of leasing companies actually exceeding those of OEMs and aviation regulators for any particular types of work. So we have to adapt our structural repair processes and documentation to these requirements to avoid running into additional questions during acceptance procedures, which would mean more costs and delays.

Along with that, to further reduce time on structural inspections we are testing new technology, namely 3D scanners. Our specialists have tested and tried optical and laser 3D scanners, both have advantages and drawbacks, so we haven’t made the final choice yet. But it is already evident that we’re moving in the right direction, as this new generation equipment will definitely help to perform inspections faster and improve accuracy.

To reduce down time for redelivery process we introduced the practice of preliminary aircraft inspections while they were still in service. So during their final checks prior to redelivery, two or three months before the leasing contract expires, we would take a close look at both the exterior and interior of the aircraft to assess the amount of work that would be required and prepare in terms of parts and components.

And then there is an aspect that we found absolutely vital, it’s staff training. We arrived at the conclusion that the competence of people involved in this sort of projects must be of a somewhat wider scope, then what is required for regular maintenance. They need to have a basic understanding of leasing contracts, particularly where they deal with redelivery terms. We started with administrative staff and we continue to work with everyone on the redelivery team.

You mentioned that your specialists take part in IATA working groups. What tasks are these groups working on?

LS: IATA’s practices helped us elaborate an internal standard for redelivery, which we now recommend to all parties involved in the process. Airlines and MROs have no objections to playing by these rules, but lessors are not too eager to accept them. So IATA’s role is to bring lessors and OEMs into this community to ensure that everyone is on the same track, following the same set of standard operational procedures.

So, which third party customers have you helped with their redelivery projects?

NB: Our customers include Russia’s largest carriers. We are constantly working on expanding our client’s portfolio, including international customers. Redelivery projects include maintenance, engineering support, documentation, interaction with the lessor, aircraft inspection, logistic etc. We can offer this as a single comprehensive service, or separately.

So we have completed several engineering projects for Russian lessors, where we prepared a technical assessment of aircraft condition when the asset changed hands from one lessor to another. This engineering support has thus become a distinct service that we are now marketing. This service targets not only operators, but also lessors, who may find themselves in these turbulent times having to quickly hand off aircraft from one operator to another. There’s an array of such projects scheduled for next year. So we have formed a dedicated team within our engineering center, which specializes on these redelivery and acceptance procedures.