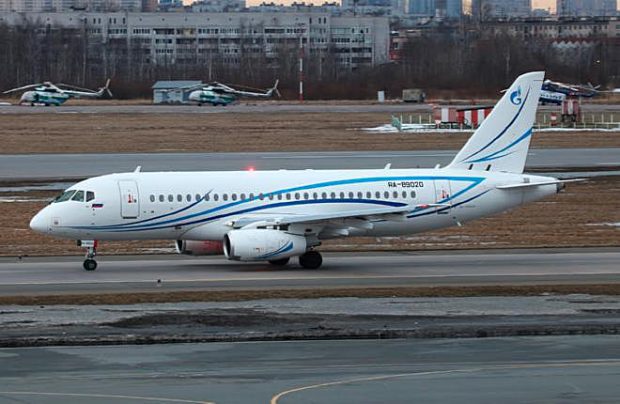 With 10 SSJ100s in its fleet, Gazprom Avia is one of Russia’s three largest operators of the type the first of which, with registration RA-89020, entered service with the airline almost five years ago (Igor Dvurekov)

The maintenance service company, which has been active in the Superjet 100 MRO market for the last two years, is continuing to build its range of capabilities for the Russian regional jet.

Gazprom Avia, which started operating SSJ100LRs in 2014 and now has 10 of the type in its fleet, is one of S7T’s long-standing customers. This year it entrusted the MRO specialist with 1С+2С-checks on four of its aircraft and also signed an additional contract on wheels repairs.

“In 2018, S7 Technics won the tender for C-checks, and is now in the process of completing its contract obligations,” Gazprom Avia’s deputy director Boris Nastasyak has revealed to Russian Aviation Insider. In addition to the C-checks, S7 Technics’ Domodedovo facility has performed a variety of service bulletins (SBs).

According to Nikita Belykh, sales director at S7 Technics, the volume of work under this contract has required more than 1,000 man-hours per aircraft. “This year, S7 Technics has also started providing repairs on SSJ100 interceptors. In addition to maintenance of standard equipment, such as galley and emergency equipment and wheels, the Domodedovo facility has also been providing repair of pilot seats produced by US company Ipeco,” he adds.

Even though of all the S7T production sites the Domodedovo facility is so far the only one that offers the ability for base maintenance on the SSJ100, there are plans to upscale the Mineralnye Vody base too, a necessary move as the company is steadily winning more contracts not only from Gazprom Avia, but from Azimuth Airlines, IrAero, Yamal Aviation and other Russian SSJ100 operators.

“The SSJ100 MRO market is growing proportionally to the manufacturer’s production output. So, considering the delivery plans for the nearest future, we expect a steady market growth and increasing demand for maintenance of this type. Along with that, we continue to expand our competences, both in aircraft and component maintenance for the SSJ100,” Belykh points out.

Gazprom Avia, which took delivery of its tenth and final SSJ100LR in 2015, holds its own Russian FAP-285 approval and is therefore capable of performing in-house line and base maintenance on the aircraft. Boris Nastasyak informs Russian Aviation Insider that the airline has indeed been performing various types of checks on its fleet, “but the C-check is rendered economically unjustifiable. So our engineering department is still providing line maintenance on the aircraft at transit airports, with technicians are part of the crew. We do not provide services to third-party organisations,” he adds.

Commenting on the levels of after-sales support for the SSJ100, a matter which has been a painful experience for some operators, Nastasyak says the manufacturer Sukhoi Civil Aircraft and Gazprom Avia have maintained a good business partnership, but there are still “some issues” regarding the logistics supply. “There’s a critical shortage of spare parts with ‘T7’ nomenclature index produced by SCAC. And the prices on metal parts in Russia are very high, much higher than for the same parts for western-built aircraft,” he notes. Typical examples of this include the airline waiting for the delivery of a spring – part of cockpit window latching mechanism – since July, and a bolt to hold an interceptor, since September.