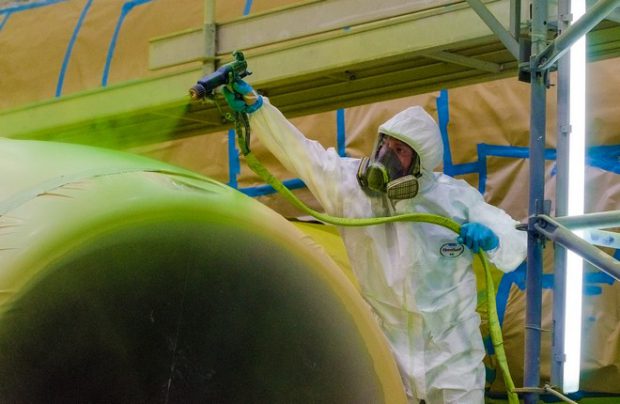 S7T delivered its record aircraft to S7 Airlines, which belongs to the same S7 group as MRO provider.

During 2018, the Mineralnye Vody aircraft painting centre re-delivered 30 aircraft to customers, as the painting team’s overall production output grew by more than 20 per cent over that of 2017.

Major Russian and Kazakh airlines have been regularly using S7 Technics’ painting centre. Some 59 per cent out of 100 aircraft repainted were Airbuses and 24 per cent of them Boeings.

“For us, 100 painted aircraft is a marker which illustrates a certain professionalism of the painting team, a well-coordinated crew and also indicates the levels of client confidence.” states Danil Naumenko, the S7 Technics Mineralnye Vody deputy director.

Since the creation of the painting centre, its specialists have mastered latest technologies of using modern materials to paint aircraft, claims S7T. The number of the painting team members has almost tripled from 22 employees in 2014 to 60 at the beginning of 2019.

“The increase in staff numbers and the growing experience of the painting team has allowed the painting centre to switch to a 24/7 working schedule comprising four shifts,” Naumenko adds.

The average aircraft painting time at the Mineralnye Vody painting centre has decreased from 10 days in 2014 to 6-7 days for painting a simple scheme, and to 7-8 days for more complicated liveries.

S7 Technics Holding’s is the Russian market’s leading provider of aircraft maintenance services and offers base and line maintenance of aircraft types produced by Boeing, Airbus, Embraer and Russia’s Sukhoi Civil Aircraft, as well as repairs, engineering works and components manufacturing for a wide range of other aircraft types. It also provides specialist repair services for the CFM56 engine.