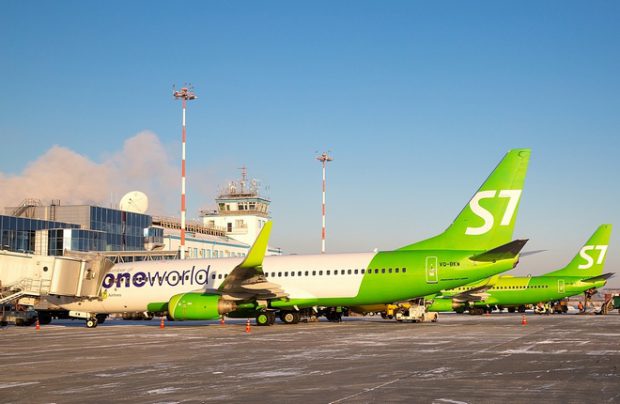 Vladislav Filev, owner and head of the S7 Group, Russia’s second biggest airline grouping, and undoubtedly the most efficient airline business in the region, claims that Russia’s ministry for industry and trade has decided to abandon the Superjet 75 project, the shortened version of Russia’s Superjet 100 regional jet. S7 Airlines had, in April 2018, shown strong interest in – and indeed signed a letter of intent – for 50 SSJ75s, with an option for up to 25 more of the 75-seater aircraft.

“Two weeks ago I was at a meeting dedicated to the development of regional aviation and one of the officials of the industry and trade ministry reported that, due to insufficient demand, they would now not be proceeding with the 75-seat version of the Sukhoi Superjet. Their main customer is Aeroflot, which has ordered only the 100-seat version,” Filev told Vedomosti business daily. “At the meeting they called our agreement with Sukhoi Civil Aircraft, [the producer of the SSJ], ‘minuscule’,” he added.

Nevertheless, Filev insists that the Russian airline industry truly needs an aircraft with 75-seat capacity. He points out that giving airlines the wrong-sized aircraft will result in a situation where the air transport industry will stop generating revenues and contribute to country’s GDP – and will instead turn into a “leech, sucking money” from the federal budget.

“The ministry’s reluctance to listen to the airlines will lead to catastrophic consequences,” Filev warns. He criticises the Russian aerospace manufacturing industry as being deficient and loss making and points to “some operators of the SSJ100 which are taking up to 60 per cent of their income from state cash injections.”

S7 Airlines is Russia’s largest private airline, and the second biggest after state-owned flag carrier Aeroflot. Filev also recalls that his airline is the indisputable leader in direct regional air travel outside Moscow and St Petersburg. It operates a fleet of 84 Airbus and Boeing narrow-bodies and 17 Embraer E-170 regional jets with a seating capacity for up to 78 passengers.

The SSJ100 is the first commercial airliner developed from scratch in modern Russia. Its manufacturer, Sukhoi Civil Aircraft (SCAC) has delivered 183 aircraft in the 2011-to-2018 timeframe. In a single-class configuration the aircraft seats up to 105 passengers.

S7 Group signed a letter of intent for 75 Superjet 75s in April 2018, with the first deliveries expected to begin in 2022. “They’ve been bending and twisting [state-controlled] Aeroflot [to order 100 more SSJ100s], whilst we are a commercial customer. In 2017 we started operating Embraers and we [deliberately] limited the leasing term to five years to [eventually] replace them with locally-built aircraft when they were brought to the market,” Filev argues.

Aeroflot is the largest operator of the SSJ100, with 49 in its fleet (one was written off after a hard landing at Sheremetyevo airport in Moscow on May 5 claiming 41 lives) and has a preliminary order for a further 100 of the type.

The state incentive programme for developing the aerospace industry has the provision for injecting some 50 billion roubles into the SSJ75 this year. This past summer, SCAC’s parent United Aircraft Corporation (UAC) said the project was temporarily halted, as the priority in the SSJ programme development is now in the replacement of foreign-made components with locally made alternatives for the existing version.

Filev suspects that the actual reason for abandoning the project is the airline’s requirement to include its own experts on the board of the SSJ75 flight testing programme to ensure its conformity with airworthiness standards. It also put forward the demand to redesign the wheel wells and replace the composite section of the passenger cabin floor after the SSJ100 crash proved that the composite was unable to withstand the 240 degrees C heat that, according to international safety standards, it should, he explains.

By contrast, several industry professionals have earlier expressed the certainty that S7’s order was merely a demonstrative posture for the government, and that the airline in fact had no need for such aircraft. “Throughout its history S7 has not once reduced itself to bluff,” Filev counters. ”Everything we did was for real and we were equally serious about the 75-seater aircraft project. For its domestic market, Russia needs precisely a 75-seat aircraft, something similar to the Soviet Tupolev Tu-134 regional jet [now no longer in operation]. The SSJ75 could have become the replacement for this aircraft. Besides, the SSJ was initially designed with 75 seats and that’s the configuration we ordered back in 2004. But later it was stretched into a 100-seater,” Filev recalls.

He is also confident that shrinking the aircraft to its original size would actually solve some problems – in particular, the engines were designed for a lower aircraft weight, so with adequate loads would suffer fewer malfunctions. The same is true for the wing. The SSJ75 could become an efficient airliner, and win over many regional carriers, Filev concludes.

“S7 Airlines has never asked for any special privileges from the government, so there must have been some business logic behind their order,” reasons Boris Rybak, general director of Infomost Consulting. “The shortened Superjet would have lower operational costs and it would offer a decent range and some Russian regional routes are quite extended. It could also offer better economy on those flights where 100-seat aircraft could be under loaded. But it’s unlikely that the lower weight would help solve the engine issues,” he says.