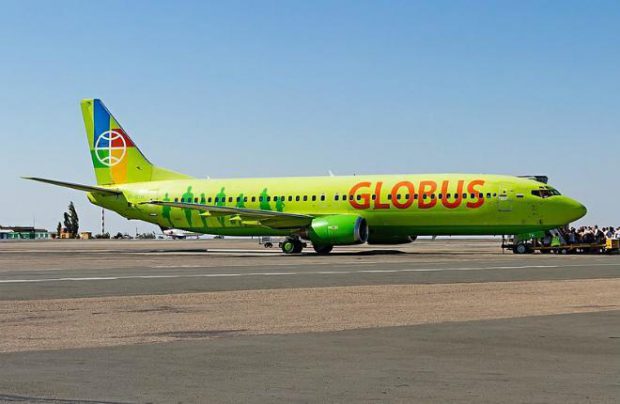 Globus was founded in 2008 in the midst of the financial and economic downturn in Russia :: Igor Bubin // Wikimedia Commons

S7 Group is owned and run by the family of Vladislav Filev and, until recently, his late spouse Natalia Fileva, who was tragically killed in an aircraft crash earlier this year.

The merger will be accomplished by transferring the Globus aircraft fleet to Sibir via their re-registration on the latter’s Air Operator’s Certificate (AOC). Globus’ssia staff will join Sibir and have already been notified of their transitions.

“The first airliner will be transferred from Globus [to Sibir] in late September and then we’ll keep on going at the rate of five aircraft every two weeks until mid-December, when we expect the process to be complete,” states Tatiana Fileva, S7 Group’s senior vice-president and the Filevs’ daughter. She adds that, in August, Sibir has also submitted an application to Russian aviation regulator Rosaviatsiya for supplementing its AOC with new aircraft types, namely various modifications of the Boeing 737.

Both airlines have been marketed under the single S7 Airlines brand for many years now but operated under the different flight codes of S7 for Sibir and GH for Globus. Once the merger is complete, all flights will be operated under the S7 code. According to Tatiana Fileva, nothing else will change regarding both airlines’ agents and all existing contracts will be rearranged accordingly. Cabin crews will be re-trained for both Airbus and Boeing aircraft.

The combined economic effect of the synergy is estimated at up to 600 million roubles (US$9.5 million) annually.

Globus’s general director Vadim Klebanov has been appointed to run the merged S7 entity whilst his peer from Sibir, Vladimir Obyedkov, plans to retire from the airline and instead manage S7 Group’s project involving the construction of a business jet assembly line in the Moscow region.

Globus was founded in 2008 in the midst of the financial and economic downturn in Russia and, at the time, Sibir was virtually on the brink of bankruptcy, which could have led to the Filevs losing control of their company. However, the troubled airline’s operational lease agreements for its Boeing 737s were rearranged with the newly established Globus as the lessee, in a move that prevented the business from folding. At that point in time, 25.5 per cent of Sibir’s shareholding was in the ownership of the Russian government, a situation that raised the likelihood of a hostile takeover by the state-controlled Aeroflot had the government decided to relinquish its share in Sibir to the national carrier. That is why having a second airline with its own AOC helped avert the unravelling of such a scenario.