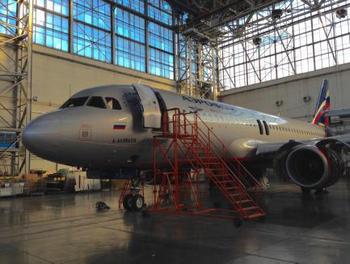 The maintenance (6Y-check + 12Y-check) on the first of Aeroflot’s aircraft was performed at S7 Engineering’s facility in Mineralnye Vody. The second one is currently being carried out at Domodedovo.

The first D-check took 33 days to complete, against the carrier’s expectation of 60 days, Engineering has announced. “It means, among other things, that the aircraft reached our hangar in good condition, and that no surprise findings were detected that could have kept it there longer,” Alexander Filippov, Engineering’s Director for Business Development, told Russian Aviation Insider. “It happens sometimes that you strip an aircraft to find plenty of corrosion, and that grounds the airplane for three months.” Filippov added that the aircraft did have several issues for S7 Engineering’s staff to handle, and that those issues required considerable efforts in terms of both logistics and maintenance itself, including a complete cabin interior makeover.

After the D-check, the aircraft was successfully test-flown and ferried back to Sheremetyevo for acceptance by the customer.

“Aeroflot has had advanced aircraft acceptance techniques for years, and has done it with foreign MRO providers in the past, so this first D-check on an Aeroflot aircraft was a serious trial for us. The fact that the second aircraft was delivered to us for a D-check speaks for itself,” Filippov noted.

According to Engineering, performing heavy maintenance on part of Aeroflot’s fleet in Russia will result in sizeable cost savings for the carrier. “Because the cost of labor hours in Russia is nominated in roubles, [domestic maintenance] results in lower costs compared to [the prices charged by] foreign MRO providers. Even though [the Russian MRO prices] are growing, the increase is not proportionate to the dynamics of the currency exchange rates”, Filippov remarked.

Earlier, Engineering performed aircraft maintenance work for other carriers that are part of Aeroflot Group. Also, in February this year, Sibir-Technic (also part of Engineering) completed a C-check on an Aeroflot aircraft.

Engineering’s senior management asserts that the company’s partnership with Aeroflot on heavy maintenance forms is “proof that the Russian aviation MRO sector is consolidating its position, and that the domestic maintenance industry is ready for a gradual import phase-out process”.

Engineering performed 72 C-Checks and 25 D-checks last year, and is looking to further improve on the figures in 2015.