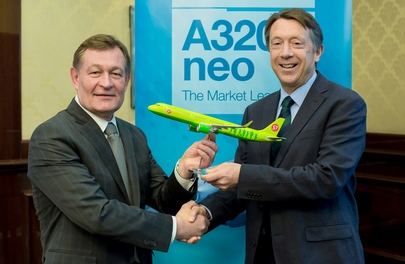 According to S7’s top-manager, the company has signed a contract with the Air Lease Corporation for the operational leasing of three A321neos an a letter of intent for two A320neos with deliveries expected to start in 2017.

All of the aircraft will feature two-class configuration with 8 seats in business class, and 156 and 195 seats in economy aboard the A320 and A321, respectively. The cabins will be outfitted with new thin seats, and due to galleys being shifted aft to the rear pressure bulkhead, the aircraft capacity is increased without compromising passenger comfort.

The decision on the engine option – a geared turbofan Pratt & Whitney PW1100G or a CFM International Leap-1A – has not yet been made. So far, the airline “has more information on the Pratt&Whitney,” Obyedkov said. The engine is the critical element of the new design, which increases the aircraft’s fuel efficiency by 15% as compared to current generation A320. The OEM also promises to bring that figure to 20% by 2020.

Vladimir Obyedkov explained, that the resulting range increase will enable the airline to phase out both of its Boeing 767s, the leasing agreement for which expires in the fall of 2017. The new aircraft will be operated on routes that connect the airline’s base in Novosibirsk with Southeast Asia, and several routes from Moscow to cities like Chita, Ulan-Ude and Yakutsk.

S7 currently operates 20 Airbus A319s, 19 A320s and four A321s. The carrier is planning to renew its fleet completely with the more efficient A320neo family aircraft within the next 10 to 12 years, Obyedkov said. In the meantime, in order to adapt to the current market situation, the airline has decided to drop its business-class offering on A319s on flights with a duration of under 2.5 hours, as the demand for such service has decreased dramatically. Several aircraft have already been reconfigured to 144 seats in economy class, and work on all 20 aircraft will be completed by the second week in May.

At the end of the first two months of 2016, S7 Airlines reported traffic increase of about 20%, mostly on domestic lines. This year, the Group expects to serve 12 million passengers, 1.5 million more than last year.

The carrier has reported improvement of its financial results in 2015: its net profit at the end of 2015 grew 6% to 922.9 million rubles (12 million dollars). At the same time, its operational expenses grew 4% and its credit obligations exceeded 8 billion rubles, up 27% from 2014.