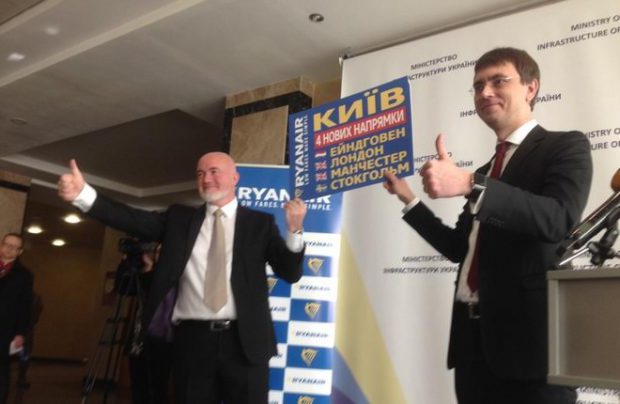 Ryanair is coming to Ukraine. The Irish low-cost carrier (LCC) has officially announced the launching of flights to two Ukrainian cities, Kyiv (Boryspil Airport) and Lviv, in October 2017.

From Kyiv, Ryanair will operate to London, Manchester, Eindhoven, and Stockholm (Skavsta Airport). The airline expects to carry around 250,000 passengers annually on its 15 weekly flights from Boryspil to all four destinations.

“Last week our airport presented a discount offer to all carriers,” Boryspil General Director Pavlo Ryabikin commented. “We are offering 75% discounts to all airlines for launching new destinations. Three out of Ryanair’s four flights are automatically covered by these discounts. We will now have to complete a lot of negotiations on the technical aspects of this.” Ryabikin added that at the moment, the only document outlining the terms and conditions of Ryanair operations to Ukraine is a letter of intent signed between the airline and the Ukrainian Infrastructure Ministry. The final contract between the airport and the carrier has yet to be signed.

Ryanair’s route network from Lviv, which operates in the open skies mode, will be even broader: the carrier will fly to Wroclaw, Warsaw, Berlin, Memmingen, Budapest, London, and Eindhoven. The cumulative traffic on these routes is forecast at 260,000 passengers annually, Ukrainian daily Segodnya reports.

Lviv Airport General Director Tetyana Romanovska confirmed having receved an offer from Ryanair in June 2016. She was not prepared to comment on the LCC’s planned fares: “However, for us to support this carrier’s flights we need to think of ways to compensate the costs of the airport services. We are currently discussing this issue with the Infrastructure Ministry, and are considering developing landside revenue activities, such as shops, restaurants, and parking services.”

Ukraine will become the 34th country in Ryanair’s route network. According to Infrastructure Minister Volodymyr Omelyan, the country’s authorities have been making attempts to attract the low-cost carrier since 2011. The Ukrainian air travel market is actively recovering, and the government is working to bring more low-cost airlines to it. Although the lack of an open skies agreement with the EU is hindering the process, the ministry is drafting a program of preferences and discounts for budget carriers.

Wizz Air, Ryanair’s direct competitor (especially on the Central and East European markets), is already present in Ukraine. It flies to Kyiv’s Zhulyany, whose chairman of the board, Denys Kostrzhevskyy, says the Hungarian LCC is the largest traffic generator for that airport. Ryanair was initially supposed to fly from Zhulyany as well, but changed its plans eventually.

Wizz Air used to operate to Lviv and is planning to return to that city in April, initially flying to Wroclaw. The LCC will launch a service between Lviv and Berlin Shoenefeld on June 18. The two carriers will come to compete directly on these routes eventually.

Ryanair is gradually increasing its presence in Eastern Europe and driving Wizz Air out. The Irish LCC has announced plans to become the leader on the Central and East European air travel market by 2018.

Wizz Air last year opened a base at Kutaisi, Georgia. Several Georgian media outlets have reported recently that Ryanair is planning to launch flights to the country, after the code of Tbilisi airport appeared on the airline’s destination list. The assumption was supported by Georgian Prime Minister Giorgi Kvirikashvili following his meeting with Ryanair COO David O’Brien. A Ryanair spokesperson replied to Russian Aviation Insider’s formal query that the airline “does not comment on rumors and assumptions”.