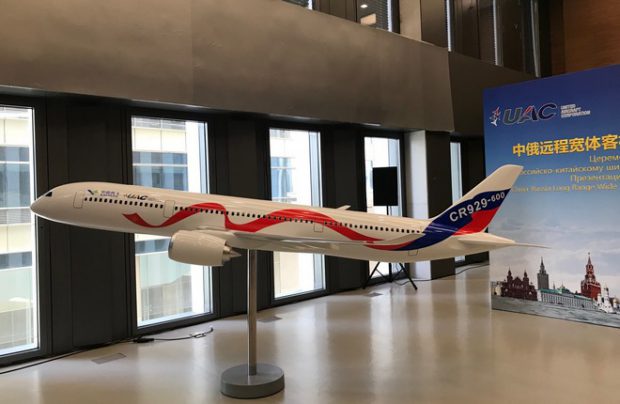 Russia’s United Aircraft Corporation (UAC) and China’s COMAC have chosen a name for their future long-range widebody commercial airliner. At the September 29 official ceremony in Shanghai, the aircraft was christened the CR929.

The partners told the ceremony that the letters C and R in the designation stand for China and Russia, while the figure nine signifies the eternity in the Chinese culture.

UAC president Yury Slyusar stressed that the designation will gives the partners an opportunity to integrate the future aircraft into their respective product ranges: “The CR929 as the name of the aircraft family will enable [China] to propose it in conjunction with the Chinese C919 narrowbody jetliner; at the same time, the numbering of the family members continues the convention applied to the airliners in the UAC’s commercial portfolio, from the [Irkut] MC-21-200/300/400 to the CR929-500/600/700.”

The UAC and COMAC began to work on the join widebody program back in 2013, but only officially launched it this spring, setting up the joint venture China-Russia Commercial Aircraft International Corporation (CRAIC) in Shanghai.

The naming ceremony indicates that the development effort is ongoing. The partners have already defined the aircraft’s preliminary design parameters, its geometry, and the primary configuration variants for the key systems and equipment.

The two corporations are now looking to send requests for proposals to major suppliers. UAC representatives confirmed to Russian Aviation Insider that the selection of the jey suppliers will be completed in late 2018 or in the first quarter of 2019.