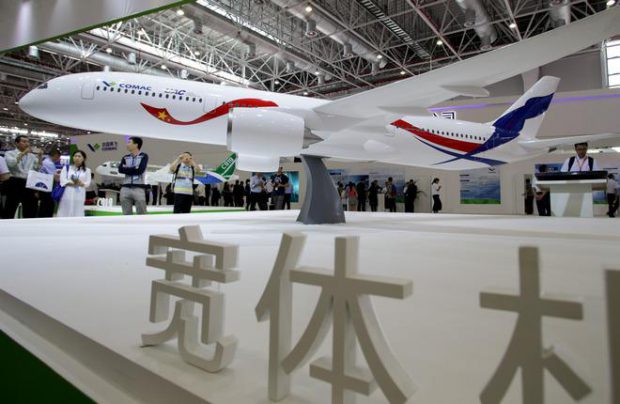 The mockup of the Russo-Chinese wide-boy is made in 1:10 scale (Photo by Leonid Faerberg / transport-photo.com)

A mockup of the wide-body Russo-Chinese aircraft is on display at the ongoing Airshow China 2016 in Zhuhai.

A mockup of the wide-body Russo-Chinese aircraft (dubbed C929) is on display at the ongoing Airshow China 2016 in Zhuhai. The 1:10 scale model shows the aircraft which is designed jointly by the United Aircraft Corporation and the Chinese COMAC.

According to UAC’s president Yury Slyusar, creation of the joint venture with COMAC has been shifted to the first quarter of next year, from the initially planned 2016. The JV’s head-office will be located in Shanghai.

Commenting on the current program status, head of UAC mentioned that it was on schedule, and that the costs are estimated between $13 billion and $20 billion, which is in line with earlier predictions. Slyusar also pointed out that the engines for the Russo-Chinese aircraft have not yet been selected. He said that the OEM had filed appropriate request with Rolls-Royce and General Electric, the only engine makers capable of producing powerplants with 35-ton thrust. In Russia, an engine of such thrust rating -PD-35 – is still at early stages of planning. UAC’s president emphasized that the corporation’s objective is to design an aircraft that would cost 10% less than its competitors.

According to earlier information the wide-body will be assembled in China, but the engineering and design center will be located in Russia. Proposals to take part in the program have been sent out to suppliers, primarily in China.

The aircraft’s base version will have the seating capacity for 280 passengers and the range of 12,000 km. It should enter service between 2025 and 2027.