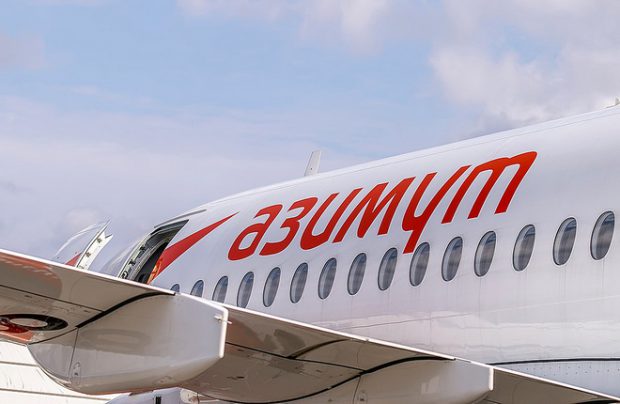 Azimuth Airlines, the only airline in the world whose fleet comprises exclusively of Russian-made Superjet 100 regional aircraft, is harbouring plans to operate larger aircraft, such as the Airbus A220 (formerly the Bombardier CSeries). This follows from the vacancies posted by the Russian regional carrier on a recruitment portal.

The ambitious carrier, which launched commercial operations just two years ago, is currently ranked 17th in the air passenger league table of Russian airlines after its traffic increased by a 112 per cent in the first eight months of this year to 666,600 passengers.

With bases at the international airports of Platov (Rostov-on-Don) and Pashkovsky (Krasnodar), Azimuth currently operates nine 100-seat SSJ100s and has two more on order.

Russian Aviation Insider learns that the airline, which describes itself as ‘a carrier of the south of Russia’, is interested in the bigger A220-300 with a maximum of 149 seats.

Airbus is currently working with the Russian aviation authorities and intends to certify the aircraft before the end of 2019, Julien Franiatte, the head of Airbus in Russia told ATO.ru, Russian Aviation Insider’s sister publication in late August. The first to be certified is the -300 variant, formerly the CS300 model.

The Airbus aircraft portfolio lists two Russian, state-controlled leasing companies – the Ilyushin Finance Co (IFC) and State Transport Leasing Company (abbreviated to GTLK in Russian) – as customers for a total of 20 of the A220-300 jets. IFC is contracted for 14 units, with six of the type part of the GTLK order.

GTLK is currently the sole lease provider of the Sukhoi Superjet 100 to Azimuth Airlines.

Interest in larger aircraft does not mean that the carrier will stop expanding its Superjet 100 fleet.