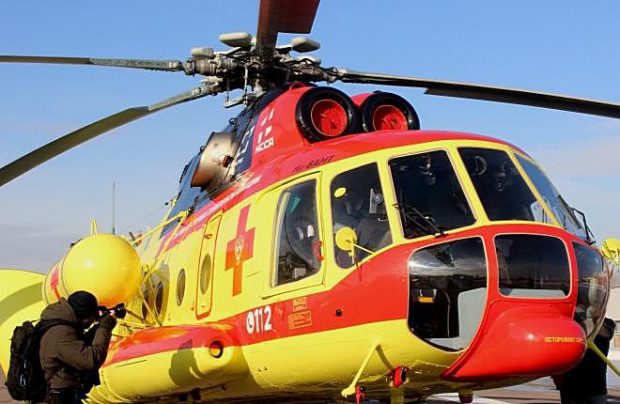 The Russian authorities are looking for ways to improve the contractual process and the real-time monitoring and control of medevac service suppliers.

Instituted almost three years ago, Russia’s State Medevac Programme was created to solve two long-lasting national problems: the first to provide efficient medical coverage across the nation’s vast territories, especially in Siberia and the Russian Far East in which there are almost no alternative transportation solutions available; and the second, which is almost equally important in the eyes of the Russian government, to support a sustainable production rate at local helicopter manufacturing facilities currently suffering from a dramatic reduction of export sales.

In the 2017–2019 period, the Russian government spent some 14 billion roubles (approximately US$230 million) on medevac services delivered by a number of contracted Russian helicopter operators. Some 80 per cent of the cost was funded by the federal budget, with the rest allocated by authorities in 50 regions covering 90 per cent of Russian land territory and containing 60 per cent of the country’s population. The biggest purchaser of medevac services was the republic of Yakutia, a large eastern Siberian region with a territory of 3.1 million square kilometres. In the period, Yakutia spent 1.3 billion roubles ($21.7 million) on medevac services.

According to official sources, the Russian government plans to allocate 15.3 billion roubles for medevac services in the 2020-2022 period, with only 62 per cent provided by the federal government, numbers that indicate increased financial contributions from local authorities.

In the meantime, GTLK, the state transport leasing company, using government supplied funding, has ordered 110 helicopters specially configured for medevac missions. At a cost of 40.6 billion roubles ($680 million), these include 81 heavy Mil Mi-8АMT/MTVs and 29 light Ansat helicopters, according to Sergey Khramagin, GTLK’s chief executive. 76 medevac-configured units have already been delivered to different operators, with the remainder to be supplied in the 2019-2020 period.

The latest additions to the existing medevac fleet are two Ansat helicopters manufactured at the Kazan Helicopter Plant and which were delivered from GTLK to SKOL Helicopter Company earlier this month. SKOL was intensively involved in the state-funded medevac programme during the 2017-2019 period, even though this company was subjected to severe criticism from both medical and aviation authorities following a string of alleged violations of contractual obligations and poor performance levels.

Early in 2018, the Irkutsk District Center for Emergency Medical Services was forced to react directly to electronically generated emergency requests, even though it is SKOL that is designated to cover the Irkutsk district, a large region in eastern Siberia. During the first months of the contract period, it is alleged that the service provider sometimes failed to respond to patients requiring urgent transportation. In several instances, to save the lives of patients, sometimes children, the Irkutsk Medical Center was forced to lease in helicopter services from third-party operators.

It is believed there were other contractual violations, including the passing on of duties to other helicopter subcontractors – including to those organisations prohibited by contract – that were different to those contractual requirements and incapable of performing such missions.

In doing so, the Irkutsk Medical Center had unilaterally terminated its contract by initiating a new tender procedure to select a new service provider and therefore incurred related financial and time losses. On numerous occasions, the life and health of some of the centre’s patients were placed in serious danger.

In September 2019, a similar situation happened with the same helicopter operator in Udmurtya republic, a region between the Volga River and the Ural mountains. The First Republican Clinical Hospital had suffered from several instances of the provider failing to supply helicopters, as well as changes in helicopter types normally used in missions and other contractual violations – and decided to terminate its contract. Again, the medical service centre was forced to initiate a new bid to select a new helicopter provider, thereby suffering financial losses whilst also endangering the lives of patients requiring emergency medical services.

Among other violations regarded as common practice for medevac service providers is the location of helicopters away from properly prepared helipads; the misuse of medical equipment or modules; the substitution of contractually defined helicopters with other types; and the use of unqualified subcontractors.

One example is when a SKOL helicopter – one that was acquired through the state medevac scheme – was seen in Africa flying commercial missions, even though it should have been on medevac duty in Siberia.

The obvious cause of the above violations is the inefficient system of governmental contracting employed by regional medical centres. This electronic system, mostly based on ‘the cheapest win’ principle, carries a number of inherent risks that inevitably arise in real life situations and do not therefore guarantee trouble-free operations. The existing electronic tender procedures often result in the selection of bidders who are unable to perform to contract requirements – or even perform at all.

The Russian authorities are looking for ways to improve this contractual process and the real-time monitoring and control of medevac contractors. A new, improved system would result in the selection of more reliable suppliers, those capable of providing timely, reliable, quality and – most importantly – life-saving services.