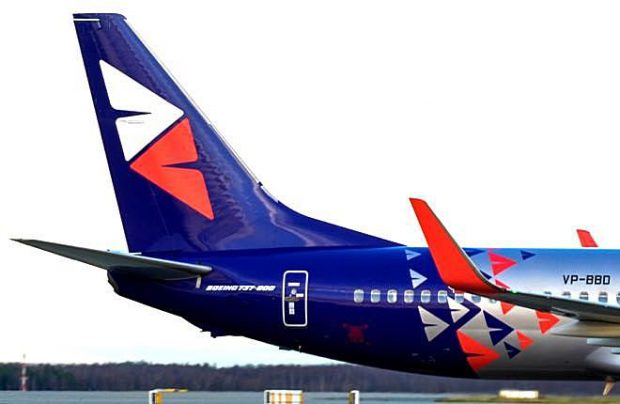 Smartavia is to continue to add Boeing 737-800 to its fleet, as the type is well suited for the development of both its scheduled and charter programmes (Evgeny Dubovitsky / ATO.ru)

Russian regional carrier Smartavia is ambitiously pursuing a high, double-digit growth strategy, as its traffic target for this year has been set at three million passengers, which would mean a 50 per cent improvement on 2019’s operational results. After the completion of last year’s re-branding exercise, when the Arkhangelsk-based private carrier Nordavia re-emerged as Smartavia, a more customer-friendly airline, it is now counting on a fleet renovation and network expansion drive to reach its targets. Within this year, the airline is planning to bring in up to five Boeing 737-800s and phase out three of its older B737-500s once the high summer season is over, Smartavia’s general director Sergey Savostin reveals.

Smartavia’s fleet modernisation programme started in 2018, when the then-Nordavia added two Boeing 737-700s to its fleet of nine B737-500s, the first deliveries in a long time. In 2019 the NG fleet was joined by another B737-700 and six -800s. The aircraft leasing deal, as well as other associated expenses, such as flight crew recruitment and training, were covered by the airline without resorting to loans, Savostin points out. The added seating capacity paid off when the airline saw traffic surge by 70.9 per cent year-on-year in 2019, when it achieved two million passengers. Along with that, the seat load factor also improved by five percentage points to 84.1 per cent. As a result, the airline climbed three steps up to 13th place in the Russian airlines ranking. Despite investing heavily in its fleet and the re-branding, the airline managed to stay in the black last year, its boss claims. “Of course, we sense all the burdens of today’s economy – the rising costs of fuel and airport fees,” explains Savostin. “But we are very serious about our internal cost optimisation. As an example, we are reviewing our inventory and expect to identify a large number of spare parts for the 737CL, which we have accumulated over years of operation, so we plan to sell them off,” he continues.

Smartavia’s existing 12-strong fleet consists of the remaining three Boeing 737-500s, three 737-700s and six 737-800s. Contracts for a further four -800s are already in place with their deliveries scheduled within next four months. The initial plan was for five units, but the last deal failed to materialise when leasing rates surged in the wake of high demand for the type, heated by delayed deliveries of the Boeing 737 MAX. Unable to start operations of the new type, many NG operators have opted to extend their leasing agreements, thus driving up the leasing costs, Smartavia explains. But the airline is still searching for opportunities to lease another -800 and is counting on adding all arriving aircraft to its Air Operator’s Certificate before the high summer travel season. Smartavia is particularly keen on the -800, as that model is a perfect fit both for its scheduled and charter programmes. Besides, in the interests of Izhavia, another regional carrier, it is flying one of these aircraft between Moscow and St Petersburg.

The remaining CL-series aircraft are expected to leave the fleet and be put up for sale once the high summer season is over. The further operation of these aircraft is unprofitable, Smartavia’s executive points out, as the current market situation does not justify the heavy maintenance costs on the type.

Growing its fleet will allow the airline to further expand its route network. It has recently announced the launch of services to leisure destination Sochi from eight cities across Russia and also has big plans “for launching new flights from St Petersburg,” as well as new charter programmes.

It is also continuing to work on the digitalisation of its services, including an in-flight entertainments system and integrating all passenger service options within one mobile app. The airline is also planning a system integration with Moscow Domodedovo, one of its base airports, a development which will jointly promote both the airline’s and the airport’s services, such as real-time baggage tracking.

Seeing itself as a descendant of Arkhangelsk’s aviation pioneers, Smartavia this year celebrated the 90th anniversary of the first scheduled airline service in the Russian north.