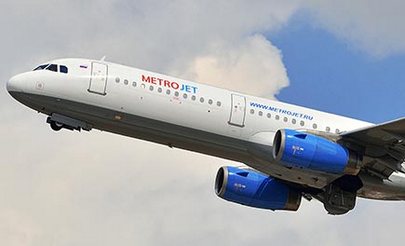 On Saturday, October 31, an Airbus A321 narrowbody operated by Russian carrier Kogalymavia (which works on the tourist charter market under the brand name MetroJet) crashed in Egypt’s Sinai Peninsula. The crash has been confirmed by Egyptian Prime Minister Sherif Ismail. The airliner was operating Flight 7K9268 from Egypt’s popular resort of Sharm el-Sheikh to St. Petersburg, Russia.

According to Russia’s Federal Air Transport Agency (FATA), the flight departed Sharm el-Sheikh at 06.51 am Moscow time; at 07.14 am, the crew failed to make contact with Larnaka ATC in Cyprus.

German news agency dpa cites a source with the Egyptian civil aviation authority as saying that the flight’s debris has been found close to El Arish International Airport on the Mediterranean coast in the north of Sinai Peninsula, not far from Egypt’s border with Israel and the Gaza Strip.

In October 2014, FATA urged Russian carriers to exercise caution when overflying Egypt due to political tensions in that country. Similar warnings were later issued by EASA and the FAA, which recommended commercial flights not to descend below FL260 (7,924 m) when overflying Sinai.

According to Flightradar24, immediately prior to its fatal descent the MetroJet flight was proceeding at an altitude of 40,000 f (12,200 m). Qatari TV channel Al Jazeera quotes the Egyptian Ministry of Civil Aviation as saying that the airliner was flying at 9,450 m before disappearing from radar screens.