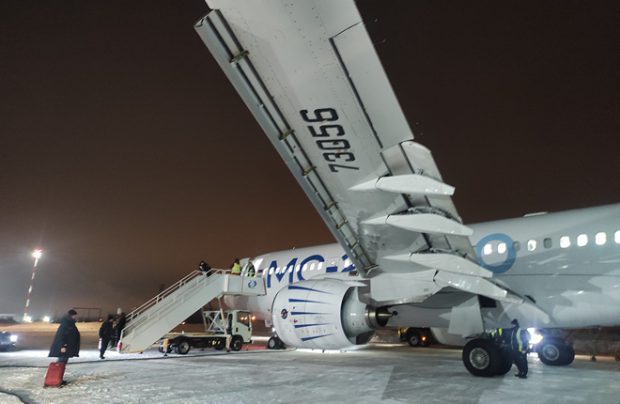 Tests of Russia’s first narrowbody commercial airliner designed from scratch in the post-Soviet era will be performed as part of the extension of its ‘base’ type certificate which currently allows its operation at outside air temperatures near the ground of minus 30 degrees Celsius.

The country’s aviation authority Rosaviatsiya has granted a type certificate for the aircraft to its manufacturer Irkut Corp. (subsidiary of United Aircraft Corp., part of Rostec) on December 28, 2021. However the first delivery to launch customer is not expected before October of 2022. In the meantime, work on optimizing the aircraft’s structure and expanding its envelope continues.

The type certificate is proof of compliance to Russian standards for MC-21-300, the aircraft’s version powered by Pratt & Whitney PW1431G and a wing that was made with imported composite materials. Obtaining type certificate is a major milestone not only for the MC-21 programme, but for the country’s entire aerospace industry. “This document is proof that MC-21-310 is ready for full-scale serial production. The airliner is modern, beautiful and without exaggeration, world class,” head of Rostec Sergey Chemezov stated.

“As a matter of fact, MC-21 has initiated a technological revolution in aerospace and adjacent industries. New materials for wing have been developed and are being produced. Design, production and testing of composite units have been set up, as well advanced technology for modular assembly. All participants of MC-21 cooperation were united in information environment, which provided digital design and production,” says Yury Slyusar, general director of UAC.

MC-21 is the world’s first narrowbody aircraft with composite wing. The share of composite structures reaches almost 40 per cent. Creation and serial production of composite materials in Russia was the main reason for delays in MC-21 programme. The need to urgently produce composite materials in house resulted from US and Japanese suppliers of raw materials having to cease deliveries after US Trade department included Russia’s AeroComposite and ORPE Technologiya into its sanction lists as having ties with the defense sector. Starting from 2021 only Russian-made materials have been used for production of MC-21’s wing. In December the first aircraft with such wing made its first flight.

Now, to start deliveries of the new aircraft to commercial operators, it needs to obtain an additional clearance, which is the major amendment to type certificate for the wing made of Russian-produced composites. According to Russia’s minister for industry and trade Denis Manturov, this additional certification is scheduled for the second half of 2022.

Launch customer Rossiya Airlines (part of Aeroflot Group) said the first MC-21-300 delivery is expected in October next year. “In 2022 we will concentrate on expanding MC-21-300’s type certificate. First of all, we will complete certification of the aircraft with the wing made of Russian-produced composite materials. We will also test the airliner for hot-and-high performance, strong crosswinds, and low temperatures. This will allow Rossiya to operate MC-21-300 in all geographical zones,” says Andrey Boginskiy, Irkut’s general director.

Launch of the first clean-sheet medium-haul aircraft in contemporary Russia was announced in 2007, with service entry planned originally for 2016. Aeroflot and Rostec signed the LoI for leasing of 50 MC-21s in 2011, with deliveries scheduled initially between 2017 and 2022. The LoI was transformed into firm order in February 2018, with delivery schedules shifting to 2020 through 2026. Whilst the programme accumulated delays, Aeroflot adopted a new development strategy, including ceding MC-21 leasing rights to its subsidiary Rossiya.

MC-21-300 can typically seat between 163 and 211 passengers, so it is aimed at the most popular segment of the air travel market, which is currently dominated by Airbus A320neo and Boeing 737MAX. In a parallel development, China’s COMAC is testing its C919 airliner. Both Russian and Chinese aircraft are developed with support of the respective governments, and should eventually take certain shares of their local markets.

According to the recent forecasts, within the next two decades Russia alone will require 800 aircraft of such size. So once the aircraft proves efficient on the domestic market, we will enter international market as well,” says UAC’s Slyusar.

At the same time, MC-21-310 version powered by Russian-made PD-14 engines is being tested. According to the schedule, the aircraft’s certification is slated for late 2022 with first deliveries expected in 2024.