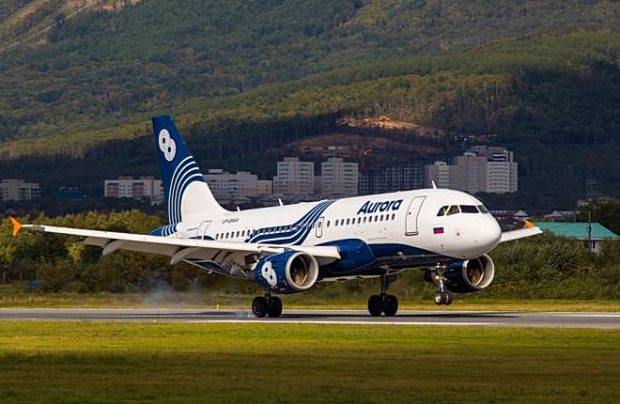 In the first 10 months of 2019, Aurora Airlines carried 1.4 million passengers, up only 2.6 per cent year-on-year, ranking it 15th in the league of Russian airlines (Yuzhno-Sakhalinsk Airport)

Aurora Airlines, the regional far eastern Aeroflot subsidiary that is co-owned by the administration of the Sakhalin region (respectively 51 per cent versus 49) has, for the first time, publicly revealed a five-year development plan.

Among other improvements, the airline is aiming to double its traffic with up to 50 new routes and, to support this ambitious plan, is a rigorous renewal and expansion of its existing fleet, which may include the Airbus A321XLR, as well as establishing its own full-scale in-house maintenance capabilities.

The far-reaching plans were revealed at a presentation made last month to the Sakhalin Region government investment council by Konstantin Sukhorebrik, the airline’s general director.

A year ago, Aurora’s Aeroflot Group parent announced plans to double the Group’s combined traffic ahead of the title airline’s 2023 centennial anniversary. Dubbed ‘100 by 100’ – in reference to the Group’s targeted handling of 100 million passengers by its 100th anniversary – the progressive strategy was approved by Aeroflot’s board of directors last November, after first being presented to Russian president Vladimir Putin.

As part of the Group’s development, Aurora is challenged with the target of boosting its annual traffic to three million passengers by 2025, whilst increasing its seat load factor from the current 75.2 to 79 per cent and the daily average flight time from 5.2 to 7.3 hours per aircraft. The airline’s financial performance is expected to match the growth, with an income target set at 24 billion roubles (US$375 million), up from 19.4 billion last year. The regional airline’s general director Konstantin Sukhorebrik points out that, to reach that target, Aurora would have to substantially grow its fleet, its staff and its network. By 2025 it is aiming to launch up to 50 new routes by expanding its geography beyond Russia’s far eastern region. The plan is to increase the fleet by at least eight new aircraft in the period.

In 2018, Aurora carried 1.6 million passengers, the majority of them (1.2 million) on local and regional routes. To capture more traffic, including new international business, the airline would have to revise its fleet. As a first step, in 2020, Aurora plans to replace its 10 Airbus A319s with the more spacious and longer-range A320s. The medium-haul fleet is scheduled to grow to reach 17 aircraft in 2025.

To start offering longer flights linking Sakhalin with central Russia – such as to Yekaterinburg, St Petersburg and Sochi – the airline is considering the Airbus A321LR and A321XLR types. Even though on these routes Aurora would compete head-on with larger players such as the privately-run S7 Airlines and Ural Airlines, both of which have already started to refurbish their fleets with latest-generation narrow-bodies, it still estimates that the market will generate an additional 200,000 passengers for the airline, provided it can offer competitive fares.

Another significant endeavour for Aurora will be the launch of a fully functional in-house maintenance centre at Sakhalin. With its construction set to begin in 2020, the hangar complex will have capabilities for the base maintenance of three aircraft simultaneously. “We currently have 80 per cent of [our] heavy maintenance performed in Taiwan,” Sukhorebrik admits. “An in-house maintenance facility would allow us to save on ferrying aircraft out of Russia and create additional working opportunities.”

The Sakhalin region’s recently held investment council meeting focused on discussing the region’s long-term development roadmap up to 2035. The discussions revolved around the best ways to achieve an economic breakthrough and reach the targeted seven per cent annual GDP growth rate. The substantial upgrade of Sakhalin’s transport infrastructure, including air travel, is one of the priorities in the strategy.

Ideally, the administration envisions Sakhalin as a global passenger and freight hub – with direct air connections with Beijing and Shanghai, Frankfurt and St Petersburg, Irkutsk, Magadan, Petropavlovsk Kamchatsky and other destinations across Russia and beyond. Aurora Airlines is one of the region’s 14 largest revenue generators and tax contributors with an annual income exceeding 10 billion roubles.