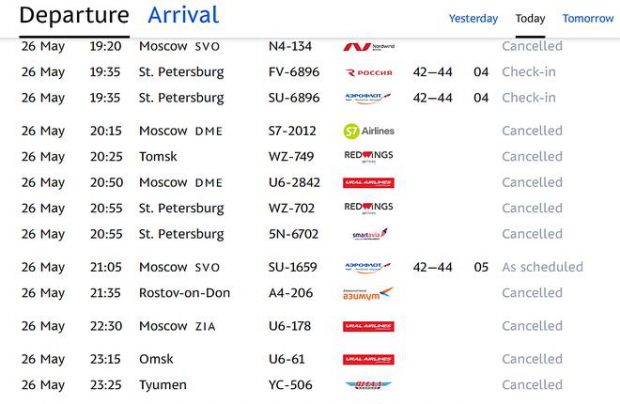 With the unpredictable nature of the on-going pandemic, the majority of planned flights may be cancelled (Simferopol airport)

Russia’s airlines are planning to considerably boost their flight schedules in June, despite the continuing presence of restrictions across the country’s territories during the Coronavirus pandemic.

Some Russian airports are reporting a quadrupling of the number of flight plans, as airlines pin their hopes on the gradual reopening of local Black Sea holiday resorts, whilst international travel bans remain. However, as with the unpredictable nature of the on-going pandemic, the majority of these flights may eventually be cancelled.

Aeroflot’s Moscow Sheremetyevo base airport reveals that the number of its flights scheduled for June now exceed those of May by 295 per cent.

Elsewhere in Russia, Simferopol airport in the Crimea peninsular is also recording an increase in flight plans – the total intended available seating capacity here is 936,000 seats – a notable increase over the healthy month of June last year when the airport greeted 690,200 passengers. In May this year the seat load factor on flights to Simferopol did not exceed 33 per cent, so it is likely that the majority of available seats may remain empty next month. In April, Simferopol handled only 29,980 passengers with a further 16,580 in the first 18 days of May.

Meanwhile, Vnukovo, Moscow’s smallest airport, is anticipating a significant rise in passenger traffic numbers in June, as carriers Utair, Azimuth Airlines, Yakutiya Airlines and RusLine have all announced a partial resumption of their flight programmes. More significantly, Aeroflot’s low-cost subsidiary Pobeda is also preparing to re-launch operations on June 1 after a full two-month grounding. Nevertheless, Vnukovo points out that the number of flight projections is still far short of those in June 2019. The airport is expecting an approximate 75 per cent decrease in traffic to roughly 600,000 passengers compared to June last year. In the April and May period the traffic total through Vnukovo was just five per cent of that of the same months one year ago.

Basel Aero, the airport holding company that manages three of the most popular Black Sea resort airports of Krasnodar, Sochi and Anapa, says airlines have now filed 5,500 flight plans for June, which is four per cent more than in June 2019. Of this number, an impressive 3,000 are destined for Sochi airport. “Notably, the quarantine measures in the Krasnodar region [which includes Krasnodar, Sochi and Anapa] remain in effect until June 6 at least, so some flights may end up being cancelled for this reason, or due to low demand,” a Basel Aero spokesman states.

Overall, industry analysts believe that the recovery of Russia’s passenger air transport market will be slow, with aircraft initially empty on return flights ahead of when the first wave of tourists head back from their vacations when airlines will be hopeful of generating some revenue on both legs. One possible development for airlines to improve their seat load factor would be if one or more of the competing carriers left the market, they note.

In a positive scenario, during the course of the summer, it is believed that, at some domestic destinations, traffic may reach between 60 and 80 per cent of last year’s demand.