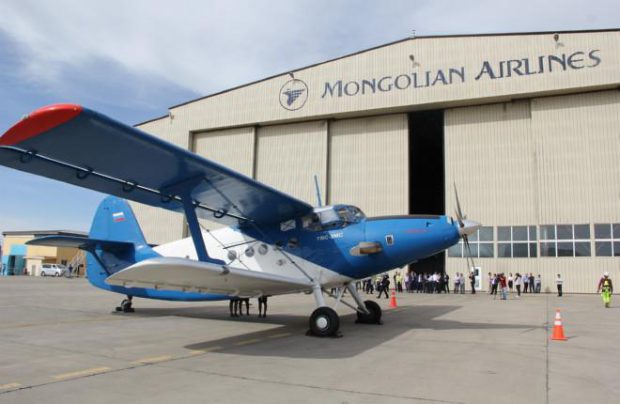 The Russian TVS-2MS turboprop, a modification of the Soviet Antonov An-2 biplane design re-engined by the Siberian Aeronautical Research Institute (SibNIA), has arrived at Mongolia’s capital city Ulaanbaatar, the Civil Aviation Authority of Mongolia (MCAA) reported on May 25.

The country may have agricultural, mining, medevac, and other roles for the type.

“The TVS-2MS came for a presentation and will perform demonstration flights across the country,” an MCAA source told Russian Aviation Insider. “We have long-standing traditions of An-2 operation, and we want to promote this to a new level. Mongolia stopped using An-2s some time back because they fly on gas.”

The source added that the local An-2s are planned to be re-engined locally to TVS-2MS standard: “There are preliminary official agreements in place. Before year-end we are likely to have converted the first test aircraft. We will be re-engining local Shvetsov Ash-62-powered An-2s, of which there are about 20, all in storage.”

Photographs posted on the MCAA website indicate that the TVS-2MS in question is registered as RA-2099G. This VIP-configured biplane was on display at the MAKS exhibition outside Moscow in 2015.

In late November 2016, a SibNIA representative speaking at a Russian conference on regional aviation said that 16 out of the 23 An-2s re-engined to TVS-2MS standard were in operation at the time (see table). He added that 72 pilots and 57 technicians had undergone training to operate TVS-2MS biplanes.

Four years ago, SibNIA expected to have delivered 1,300 to 1,400 re-engined An-2s by 2017-18. Potential clients could be airlines, forestry services, aerial pest control agencies, the military, and pilot training schools, both in Russia and such countries as Kazakhstan and China.