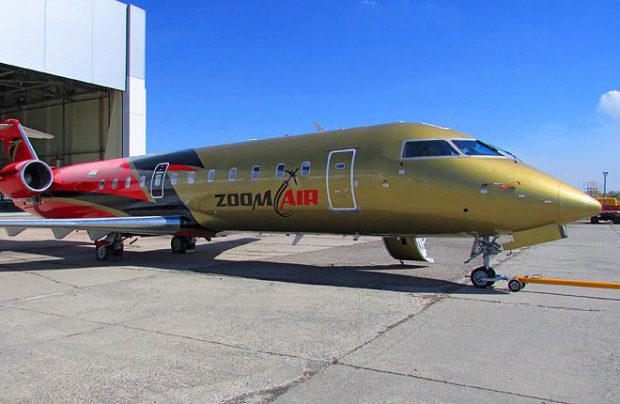 Mineralnye Vody-based aircraft painting center of S7 Engineering (part of Russia’s Engineering Holding) has completed its first ever order for a carrier from outside the former Soviet area.

In September 2016 the Russian painting facility re-delivered a freshly repainted Bombardier CRJ200 aircraft with tail number VT-ZOA to its operator, an Indian regional start-up carrier Zoom Air. The aircraft had previously been operated by a Russian airline Ak Bars Aero, which left the market.

S7 Engineering used the cutting edge base coat / clear coat painting system from the Dutch provider Akzo Nobel, on Zoom Air’s aircraft. The work was done in 10 days, each day four shifts of eight to ten specialists carried out their share of work. The Engineering’s spokesperson explained that the complicated livery with many colors and small details required so many man-hours.

“As the CEO and Managing Director of the company I would like to thank you for a brilliant job done and in most professional manner. I was myself present at Mineralnye Vody at your centre and had met the team and found the workmanship really superb. There is no word to thank for such a brilliant job done as definitely it’s not an easy livery to work with,” Zoom Air’s CEO Koustav M. Dhar commented.