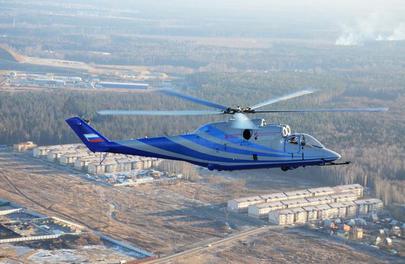 Flight tests of the Perspective High-Speed Helicopter demonstrator are expected to start in June this year.

The aim is to accelerate the aircraft to 400 or 450 km/h, Russian Helicopters director for innovation Andrey Shibitov announced. The next stage of the High-Speed Helicopter program involves attempting to reach the speed of 500 km/h.

Shibitov explained that the main element of the  high-speed helicopter demonstrator is the new main rotor system. This new development, which the OEM is planning to have patented, helps defer the airflow separation on the main rotor blades, while preserving the classic configuration.

On the existing classic scheme helicopters (with the main and tail rotors), the speed is limited to approximately 350 km/h. Exceeding this speed leads to flow separation. The blade tips, in their rotation, reach a point at which their own speed adds up to the speed of the helicopter. The dangerous flow separation, which leads to a stall and loss of control, appears when the totaling speed becomes supersonic.

The high-speed technology demonstrator made its first flight on December 29, 2015. The demonstrator is based on the Mil Mi-24 attack helicopter, which, according to Shibitov, is close in terms of aerodynamics to the Perspective helicopter. Prior to the flight-tests, several fuselage parts had been redesigned to decrease aerodynamic resistance and improve the helicopter’s high-speed performance.

In 2016, three years into the demonstrator development, the program was split into two parts. The Perspective High-Speed Helicopter testing is conducted within the “Speed” project. The second part is about development of a Pespective Medium-Class Commercial Helicopter with the MTOW of over 10 tons.

The results of the demonstrator testing and the technology developed within its framework may be used for other helicopter programs, particularly, the new Mil Mi-38 heavy and some combat aircraft.