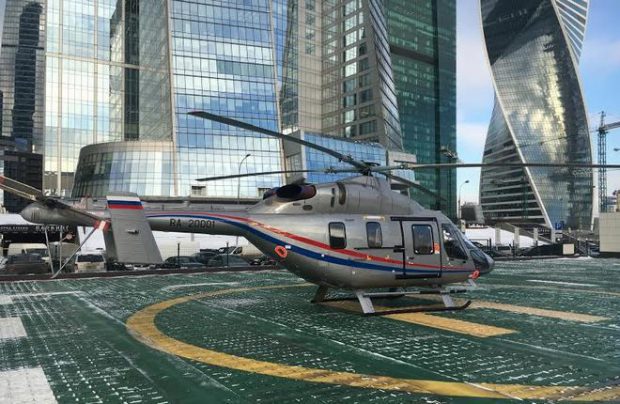 Russian Helicopter Systems (RHS), a Moscow-based privately-owned company, has started operating a second Ansat light twin helicopter. The Russian-built rotorcraft, equipped with a medevac unit, was delivered under the terms of a contract signed during the Hydroaviasalon-2016, the company told Russian Aviation Insider.

The helicopter was delivered at the beginning of this year. As it was reported earlier this is the first leased Ansat. The rotorcraft was leased through Sberbank Leasing. The helicopter is based in Odintsovo district, near Moscow, and is used for planned and emergency transportation of patients across the Russian capital and Moscow Oblast.

A Russian Helicopter Systems spokesperson said that there are hopes that Ansat will play an important role in the medevac aviation development. Last year Russia’s Health Ministry, Ministry of Transport and Ministry of Industry and Trade were working out the leasing schemes for Ansat medevac versions deliveries across Russia. Moreover, Russian Prime Minister Dmitry Medvedev signed a government decree to subsidize medevac aviation development in 34 regions of Russia. According to the expert estimates the project has been primarily focused on Ansat.

Beside RHS the rotorcraft is now being operated by Republican Clinical Hospital in Tatarstan.

As part of the decree the helicopters will be leased by the State Transport Leasing Company (STLC). The company has already purchased six Ansat helicopters in the medevac configuration. However, it is known that the regions are opting for larger Mil Mi-8 helicopters for medevac missions (STLC placed an order for 23 helicopters of the type).

Sergey Khramagin, STLC CEO, told Izvestia that the first stage of the medevac aviation project stipulates that all 29 helicopters equipped with medevac units will be leased to operators for a period of 10 years. According to Khramagin, RHS airline will also be the first to receive a medevac Ansat helicopter from STLC. The rotorcraft will be used in Volgograd region.

RHS now operates two Ansat-type helicopters, including one leased by Sberbank Leasing. The first rotorcraft was delivered in October 2016 and has a VIP specification. It is used for pilot training and passenger transportation. RHS is now the only company offering full cycle of Ansat sales services including transaction support and flight and technical personnel training. The company also offers ground infrastructure construction and training of regional pilots that will be taking part in medevac development schemes. Moreover the company carries out full service of the type.