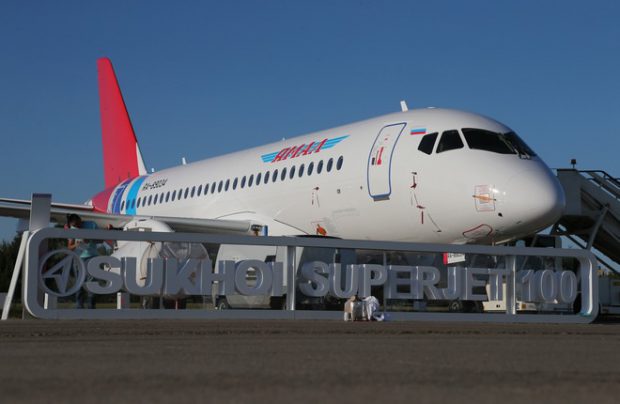 The Russian government helped to set up a domestic leasing system for the SSJ 100 (Fyodor Borisov / Transport-Photo.com)

Russian aerospace flew into turbulence last year, as dwindling passenger numbers, changes to the country’s corporate administration system and a slump in demand for new aircraft all combined to send the industry into a downwards spiral.

Reshuffles at the United Aircraft Corporation (UAC) affected the entire corporate administration system in 2015 and, coincident with the declining passenger business, resulted in a corresponding drop in demand for new airliners.

This bleak scenario had the effect of worsening Russian aircraft manufacturers’ already shaky positions in the domestic market – and forced the government to come to the rescue.

UAC reported only 29 aircraft sales last year, including five to foreign customers, leaving its share of the civil market at slightly above 18% of all deliveries, confirming its principal focus as a supplier to the defence market.

With UAC specialising in modifications of civilian aircraft types for government customers, the number of commercial deliveries was even smaller: 25 Sukhoi Superjet 100 regional jetliners, a total which included airframes built in previous years. Manufacturer Sukhoi Civil Aircraft Company (SCAC) built 17 of the type last year, half the number assembled at the peak of production in 2014.

This output plunge is indicative of a serious crisis in the country’s flagship commercial aviation program, caused both by declining market demand and by manufacturers’ financial hardships.

Sources: Ministry of Industry and Trade, UAC, data from manufacturers.

Despite this, the SSJ 100 program has been a successful project to date: SCAC built the 100th airframe in 2015 and delivered it in 2016 to Aeroflot, which operates the largest Superjet fleet. In all, there were 41 of the type in operation in Russia as of early 2016; last year, this combined fleet clocked up more flying hours than any other Soviet- or Russian-made type.

Having successfully marketed the airliner, SCAC then ran into sluggish sales in 2015. The manufacturer’s backlog was essentially dependent on two customers: Aeroflot, which received 30 units under this first contract in summer 2016 and is considering an option for 20 more; and Mexico’s Interjet, with 30 aircraft on firm order. SCAC’s other major client, Gazpromavia, received the last of its 10 Superjets in 2015 but has no immediate plans to order more. Another major deal, signed with UTair Aviation for six SSJ 100s, was cancelled when the operator encountered financial problems.

Even though SCAC enjoyed a major breakthrough last year, with a firm order for 15 jetliners from Irish carrier CityJet, its first EU customer (the first two airframes were delivered in 2016), this boost was not enough to secure the program’s long-term prospects. As on several occasions in the past, the Russian government stepped in to help in the form of loans and subsidies for SCAC to the tune of 135 billion rubles (US$2.1 billion at the current exchange rate), including 100 billion rubles for debt restructuring purposes.

In addition, the government sponsored the creation of a domestic SSJ 100 leasing system through the State Transport Leasing Company (known by its Russian acronym GTLK). A total of 30 billion rubles ($481 million) was injected into the company’s registered capital, which enabled it to purchase 32 SSJ 100s and offer them to Russian operators under lease contracts denominated in rubles.

However, this initiative has been skidding on the runway too, with the ruble’s depreciation forcing GTLK to seek additional sources of financing and also because its potential customers operate on relatively limited budgets.

The government also helped another SSJ 100 lessor, Sberbank Leasing, by covering the company’s interest payments on the loans it had taken out in order to purchase 10 SSJ 100s for subsequent lease to Aeroflot. Foreign Superjet sales were similarly bankrolled from the federal budget, partially recompensing export-oriented lessor VEB-Leasing for the interest it was paying on the aircraft delivered to Interjet.

Despite these supportive measures, UAC and SCAC were eventually forced to revise the SSJ 100 production schedule. The current plan is to sell 27 of the type in 2016, 34 units in 2017 and 40 in 2018. This means the Komsomolsk-on-Amur production line, capable of rolling out 60 airframes per year, will be running at half its capacity.

UAC’s other civilian aircraft programs are either in pre-production or being phased out. The latter two are the Tupolev Tu-204/214 narrowbodied family and the Antonov An-148 regional jetliner. For several years now, both types have been built exclusively for military and government customers. UAC is planning to suspend An-148 production from 2018, following completion of its contract with the Russian military. The challenging nature of Russia’s current relationship with Ukraine, where the type was developed, makes resumption of its production highly unlikely. Also in 2018, UAC’s Ulyanovsk-based Aviastar-SP factory will discontinue Tu-204 assembly to make room for the production build-up of the Ilyushin Il-76MD-90 military transport. The Tupolev family will continue to be built for government agencies at UAC’s production facility in Kazan.

UAC’s second most important civilian program is now the Irkut MC-21 narrowbody, which is expected to help Russia re-enter one of the most lucrative niches in the global commercial aircraft market. The MC-21 family comprises two versions: the MC-21-300 baseline, seating between 163 and 211 passengers, and the shortened MC-21-200 for 132-165 passengers. It will compete in the market against the re-engined Airbus A320neo and the Boeing 737 MAX.

As with the SSJ 100, the Irkut project strategically involves a number of international contributors. The MC-21 features a greater proportion of innovative solutions than the Superjet, including a composite wing, geared turbofan powerplants and advanced avionics, decisions aimed at making the airliner better positioned to take on the market competition. Extensive use of composite materials results in a relatively lightweight airframe and with a fuselage nearly five meters longer, the MC-21 has the same MTOW as the A320neo and is three tonnes lighter than the B737-8 MAX, which has an even shorter fuselage. The MC-21 also features a wider fuselage cross-section, at 4.06 meters, which the manufacturer says will enable carriers to better optimize seat and aisle width configurations.

The introduction of all these competitive innovations and additions has affected the MC-21 development timeline. Originally aimed at hitting the market ahead of its primary rivals, the airliner’s prototype was rolled out only in mid-2016 and is not expected to fly before early next year. Irkut, a UAC company, is now looking to obtain a Russian certificate for its Pratt & Whitney PW1400G-powered MC-21-300 in 2018, to be followed by EASA certification in 2019. This delay may nevertheless prove beneficial for the program, giving the key suppliers more time to perfect their products. For example, Pratt & Whitney has promised to replicate on the PW1400G the solutions to teething problems experienced on its similarly designed PW1100G engines, which power the A320neo.

Irkut’s other major challenge is that of marketing the MC-21. The manufacturer expects to sell 1,060 airframes over the next 20 years, but its current firm portfolio stands at just 175 airframes and 100 options, mostly from Russian lessors.

The MC-21 program will clearly require substantial state support, just like the SSJ 100 before it, although it is safe to assume that, in the current economic situation, the federal budget may not necessarily be able to accommodate a third major aviation project, a factor which potentially jeopardises UAC’s plans to develop a new widebody long-range version capable of carrying up to 280 passengers to distances of up to 12,000 km. The aim is to replace the Ilyushin Il-96 airliner, which has all but ceased commercial operations.

Without guaranteed state support, UAC is unlikely to be able to undertake the widebody effort on its own, which explains why the company has, since 2014, been working in partnership with Chinese corporation COMAC. Both parties have formally committed to a 50/50 relationship on the project, with UAC undertaking the lion’s share of research and development and COMAC providing the necessary funding, as well as organizing the aircraft’s final assembly and securing a potential sales market.

In a separate effort, Ilyushin has been researching the possibility of developing a new widebodied aircraft based on the Il-96-300. UAC spent last year preparing a feasibility study and studying other materials required for passing the preliminary design Gate 2 phase. A joint Russian-Chinese engineering team has already completed two different conceptual studies, which will now have to be aggregated. The aircraft’s first flight is set for 2021, to be followed by certification in 2025, although it is not entirely clear at this point whether COMAC is indeed committed to working on the project jointly with UAC.

The Chinese corporation has developed two airliners in the past: the ARJ21 regional jetliner and the C919 narrowbody. Both programs were heavily subsidised by the Chinese government. It is possible that COMAC will eventually choose to go it alone on a widebody design, and that the joint effort with UAC is merely a political gesture endorsed by the two countries’ leaders.

Elsewhere in the aviation market, Russian Helicopters, the country’s umbrella rotorcraft corporation, has also experienced a drop in demand, with deliveries consistently on the decline since 2012. A total of 212 units were delivered last year, 59 fewer than in 2014. During the period, the company’s firm backlog shrank by 9.5%, to 494 airframes. Although the company does not disclose the share of civilian aircraft in its portfolio, most of the orders traditionally come from military customers.

The overall slowdown of the domestic helicopter operations market has affected Russian Helicopters’ best-selling civilian product, the Mil Mi-8/17 medium-lift family. The latest modification, the Mi-171A2, is expected to be certified during the first quarter of next year, but no orders have thus far been reported.

The company’s other medium-lift type, the Mi-38, is similarly in limbo. Its civilian transport version was certified in late 2015, but now it looks like as if that type will sell mostly to military operators.

In other developments, Russian Helicopters has been attempting to enter the light rotorcraft segment, which is dominated by foreign types in Russia. The company continues to improve the performance of the Kazan Helicopters Ansat light helicopter, whose first deliveries may take place before year-end.

Another light type, the Kamov Ka-226 might benefit from initial military contracts: its series production will be launched to accommodate a major Indian Air Force order, which could expedite further development of civilian modifications.