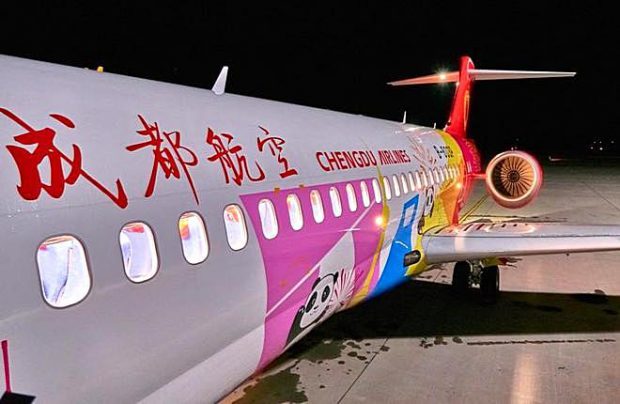 The Vladivostok flight is the first of a twice-weekly service schedule launched by Chengdu Airlines, a subsidiary of Sichuan Airlines, and which operates a fleet of 47 aircraft, including 15 Comac ARJ21-700s configured with 90 economy-class seats and six or eight in business class. According to Chinese sources, the Commercial Aircraft Corporation of China (COMAC), the aircraft’s manufacturer, has to date delivered only 19 serial aircraft of the type to customers since its 2016 entry into service.

Commenting on the launch of the new route, Alexander Bobrov, Vladivostok International’s director for aviation commerce, emphasises that passenger flows between Vladivostok and eight Chinese destinations in its network have been growing at a double-digit rate, in both directions. In the first nine months of this year, traffic to China increased by 21 per cent. “This year we focused on promoting Vladivostok with Chinese tourists, and the passenger flow has been rising steadily. In 2019 we welcomed three new Chinese carriers. Besides Chengdu Airlines, these are Juneyao Airlines and Beijing Capital Airlines,” he notes. These new airlines have joined China Southern, which has been serving several routes from Vladivostok for a number of years.

China, as well as Japan and South Korea, are the major contributors to Vladivostok’s recent traffic growth. In the first half of this year the Russian airport handled a total of 1.073 million passengers, a 22 per cent increase on the same period last year. With its recently opened new passenger terminal, the airport now serves 20 Russian and foreign airlines flying across a network of 45 scheduled destinations.