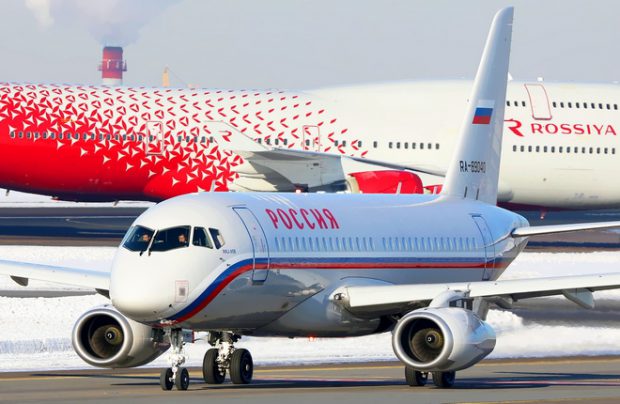 Russia’s Ministry for industry and trade has proposed to cancel the zero import duty regime currently in effect for foreign-made commercial airliners, Kommersant daily reports. It covers the aircraft with seating capacity ranging from 50 to 300 passengers and MTOW between 20 and 90 tons. This measure is intended to protect Russian aircraft programs, Sukhoi Superjet 100 (SSJ100) and MC-21.

The ministry is discussing the initiative with its peers Transport Ministry and Ministry for Economy. It may be implemented as early as 2019, when MC-21 is scheduled to enter service.

The zero duty regime has been largely effective since 2010 following a resolution by the Eurasian Economic Commission. Although in the period between 2014 and 2016 the tax was imposed on the 51-109 seat category. In December 2015 the regime was extended until 2023. Its potential waiver will affect the most popular types with Russian operators – the Airbus A320 family (currently 262 in operation with Russian carriers) and Boeing 737 (total of 172 aircraft of different modifications), as well as Embraer E-170s and E-175s.

Since July 2016 the fleet of Western-built aircraft operated by Russian airlines grew 16% to 570 airframes. For comparison, as of April this year 65 SSJ100s were flying for Russian operators. MC-21, in its turn, is just undergoing flight testing.

Russia’s vice-premier Dmitry Rogozin speaking to Russia 1 TV admitted that the output of the domectic producers currently stands at about 30 aircraft per year. However he promised that by 2025 this number would reach 110. The taxes on Western-built aircraft will be imposed gradually starting from 2019. By that time domestic OEMs will produce sufficient number of aircraft to satisfy the needs of the local carriers.

The initiative would not interfere with Russia’s obligations to the World Trade Organization, Kommersant speculates, as the condition was to “reduce the import duties to 12% and 7.5% respective of the aircraft size, within the period until 2019.”

Before the customs duties were lifted, they ranged from 7.5 to 15.6% of aircraft’s cost depending on its size.