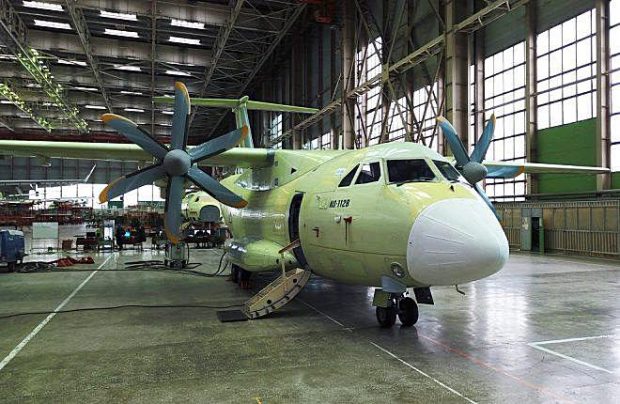 The civil version of the Ilyushin IL-112V is potentially interesting to Polar Airlines, KrasAvia and several other Russian regional carriers (PAO IL)

By 2023, Russia is expected to be able to serially produce up to 12 Ilyushin IL-112V, the new lightweight military transport turboprops, annually, Yury Grudinin, general director of Ilyushin Aviation Complex (part of the United Aircraft Corporation) stated in an interview with Expert Business Weekly. Demand for the civilian version of the ramp aircraft is estimated at 50.

Details of the programme development of the light military transport turboprop aircraft have recently been revealed. The first test prototype of the IL-112V made its maiden flight in late March 2019, but turned out to be at least two tonnes over the maximum take-off weight (MTOW) specified by customer, Russia’s defence ministry. Aircraft designer, Ilyushin, commenced an aggressive weight control effort that, at the first stage, reportedly resulted in a one-tonne weight reduction. This upgraded lighter version of the aircraft is currently undergoing static tests at the Central Aerohydrodynamic Institute (TsAGI). The flight-testing programme will be resumed in 2020.

Further weight-reduction steps implemented on the third prototype, which is currently being assembled at Voronezh Aircraft Production Association (VASO), are expected to shave off another tonne of the 24-tonne MTOW. The fourth prototype’s production is now also underway. The significant weight reduction is achieved through the wider use of composite materials both in the aircraft’s structure and its systems, as well as engines and propellers, Grudinin explained. The assembly of these two prototypes is expected to complete before the end of 2021, and they should join the test flights in 2022.

Grudinin also noted that Ilyushin is working on certification of the aircraft platform for commercial use, saying the IL-112 may be a viable regional aircraft option for civil operators.

“This aircraft is a replacement for the [Antonov] An-26 and several carriers in Siberia and the Far East of Russia – like Polar Airlines, KrasAvia and so on – have expressed interest in [the programme]. We are ready to make IL-112’s price affordable, so it will fit the market. But we’ll have to resort to all possible measures of state support, including subsidies to airlines, which serve the country’s remote regions. I believe, we could sell at least 50 IL-112s in the civil version,” Grudinin said.

The military version currently developed is designed to carry up to 44 people or up to five tons of freight to the distance of 1,200 km.