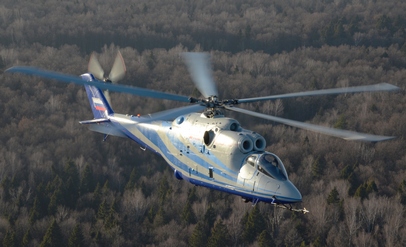 “The project’s aim is to create scientific and technological potential for increasing rotorcraft flight speed by 50% compared to the currently produced serial helicopters,” Russian Helicopters said in an official statement.

Flight tests should also provide the company’s designers with experimental data on the new all-composite main rotor blades created by the Mil Moscow plant. The manufacturer put its top expertise in aerodynamics, use of composites and production technology into the blades to make them aerodynamically advanced, Russian Helicopters claims.

Test results may be used for developing new rotorcraft or upgrading existing programs.

The technology demonstrator is based on the Mil Mi-24 attack helicopter. Several fuselage parts have been redesigned to decrease aerodynamic resistance and improve the helicopter’s high-speed performance.

In 2016, the project will be split into two programs. The demonstrator will be used to research technologies for increasing the rotorcraft’s flight speed to 400 km/h and, later on, to over 450 km/h. At the same time, Russian Helicopters is working on a commercial medium-class helicopter with a takeoff weight of over 10 tonnes, which could incorporate all of the demonstrator’s advances.

Development of an engine for the new helicopter is also on track. At the first stage, the VK-2500M turboshaft engine will be upgraded with new features, including a new compressor, free power and compressor turbines and an engine control system. The next stage of development will include creating a new engine with use of additive and other progressive technologies.