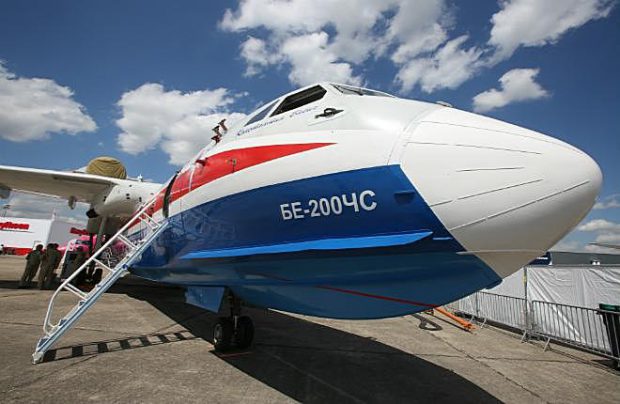 At the ongoing Paris Air Show, Russia’s Beriev Aircraft Company, which is part of Russia’s United Aircraft Corporation (UAC), has expanded its existing sales contract from five to seven Be-200ChS amphibians to a Chilean customer.

Yury Grudinin, Beriev’s general director, has revealed that deliveries to customer Asesorias CBP are scheduled for 2020 and 2021. “What we are offering today is a complex solution which, along with the aircraft includes a waterdrome project and aftersales support system,” he explains.

The contract with the Chilean company was originally signed in September 2018. At the time Russia’s United Engine Corporation (UEC) was making arrangements for re-powering the Be-200 with SaM-146 engines produced by a Russo-French joint venture between UEC-Saturn and Safran Aircraft Engines. However, in the spring of this year, the word was spread that the re-engining project had been suspended. UAC has now revealed that the contracted aircraft will be powered by their original engine option, the D-436TP made by Ukrainian Motor Sich. Since the Ukrainian government imposed a ban on all cooperation with Russian companies, the delivery of the engines is likely to be arranged via a multilateral international cooperation.

Taganrog-based Beriev holds a number of orders for Be-200ChS from international customers. Under one of the contracts the manufacturer is planning to start deliveries to Seaplane Global Air Services of the USA within the same 2020-2021 timeframe, Grudinin told RIA Novosti newswire. The agreement for 10 amphibians was finalised in June last year. “We’ve got the agreement and the papers have been signed, [with an obligation to deliver the aircraft] within 15 months starting from the first financial [transaction],” Grudinin confirmed.

The Be-200ChS is a multi-role utility amphibian aircraft designed for fire-fighting, emergency responses, search and rescue on water, wildlife monitoring and other missions. In 2007 the aircraft was awarded a supplementary type certificate approving it for carrying up to 43 passengers from sea and land aerodromes.

At the Paris, Le Bourget event, the UAC delegation also held negotiations with Indian partners regarding using the Be-200 for passenger transportation and has signed a memorandum of understanding to that effect.

These civilian orders will help keep the Be-200 programme alive. The last aircraft for its main customer, Russian Emercom, was delivered in February of this year.