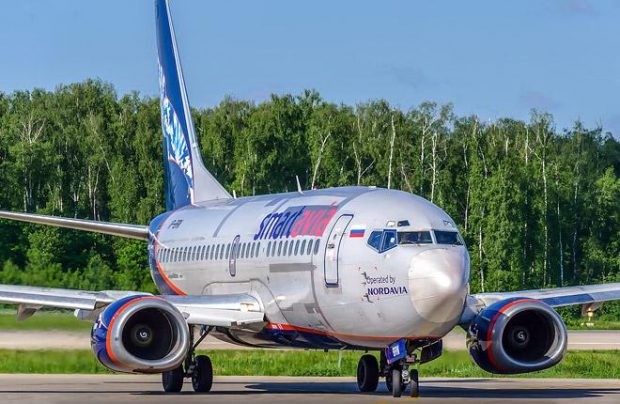 Nordavia, recently re-branded as Smartavia, will say farewell to its Boeing 737 classics next year :: Gleb Borzyakov

According to recently revealed strategic plans, the airline is phasing out its classic Boeing 737-500s and is expected to replace them with NGs so that in 2022 it will operate 20 Boeing 737NGs. In the first four months of this year, the fleet development initiative has already provided a positive impact, with both passenger numbers and seat load factors up in the period.

Smartavia’s first flight of its newly delivered third B737-700 operated the Arkhangelsk-Moscow (Domodedovo) route on June 4. Like the two other aircraft of this type in the airline’s fleet, the latest accommodates 146 passengers in economy class. Also this year, the airline is anticipating the delivery of four more 189-seat B737-800s, with one aircraft of this type already in the expanding airline’s fleet.

Smartavia (IATA code: 5N) received its first Boeing 737NG a year ago. Prior to that, the carrier had, for many years, relied on its nine vintage B737-500s. Last year, Smartavia stopped operating three of these aircraft and currently there are six fully owned B737-500s. These aircraft, built in 1990-1993, are configured to accommodate 132-135 passengers in economy class.

According to Sergey Savostin, the airline’s chief executive, three more B737-500s are to be withdrawn by the end of 2019 and next year Smartavia is to ground the last three of the type so that its reliance on the Boeing 737 Classic will finally be ceased.

Maintenance support for the carrier’s Boeing 737NG fleet is to be provided by Lufthansa Technik after Smartavia and the German maintenance, repair and overhaul (MRO) provider signed an agreement to that effect on June 6.

Over the next three years, Smartavia plans to receive four Boeing 737NGs each year. If this ambition is fulfilled, the airline’s fleet will consist of 20 aircraft in 2022.

The replenishment with the more capacious and longer-range NGs has already had a positive impact. According to Russia’s Federal Air Transport Agency (Rosaviatsiya), in the January-April period, the number of passengers carried by the airline increased by 33 per cent (up to 328,000), and the seat load factor by 8.1 p.p. (up to 80.1 per cent) year-on-year.

It is because of the B737NG that eastern Siberia has now appeared on the airline’s regular flight map, with the first flights to Ulan-Ude to be performed on June 18 and to Irkutsk on June 19. Prior to that, Chelyabinsk was the most easterly airport served by Smartavia from Moscow’s Domodedovo.

Another key advantage of the B737-800’s carrying capacity being significantly higher than that of the B-737-500, Smartavia’s management can now also focus on serving holiday charter destinations. “We are designing a large charter programme that allows residents of Arkhangelsk, Murmansk and Naryan-Mar – traditional city destinations within our footprint – and residents of other regions, to gain access to a wide range of offers, especially during the holiday season. This includes Russian Black Sea resorts and popular international destinations in Turkey and European resorts for example,” Savostin adds.