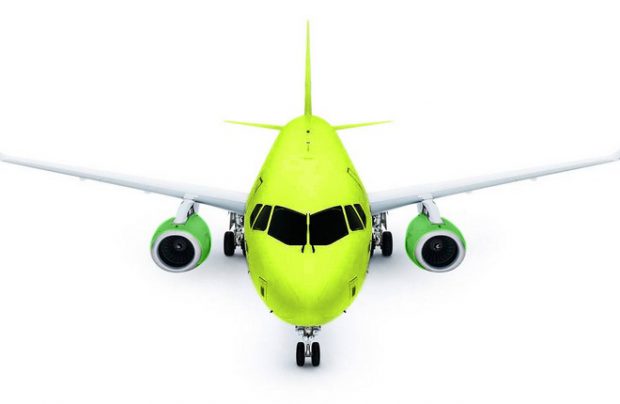 Russia’s S7 Group has signed a letter of intent with Sukhoi Civil Aircraft (SCAC), the producer of the Sukhoi Superjet, for a potential substantial order of the regional jet’s shortened, 75-seat version, dubbed the SSJ75.

The document, inked at the Eurasia Airshow in Turkey, could mature into a firm order before the end of this year, for 50 SSJ75s, with an option for up to 25 more. Deliveries could start in 2022, SCAC reveals in a formal announcement.

The programme may be supported with orders from governmental customers, such as Rossiya Special Flight Squad, which flies high-ranking Russian officials, and state law enforcement agencies, according to comments made to Vedomosti business daily by Alexander Rubtsov, SCAC’s president.

Scarce details have thus far been revealed regarding the SSJ100’s shorter sibling. Industry experts believe that the project may have been launched in an effort to reduce the number of western-made components used in the manufacture of the Russian regional jet. The current political environment has created an air of uncertainty for SCAC’s product, the share of foreign components for which has now reached some 70 per cent, including engines, APU, hydraulics, cabin interiors and other vital equipment.

The new realities of the global economy, affected by political tensions, are forcing the Russian aerospace sector to search for resources to replace western-built parts with those produced domestically.

Flight tests of the new Superjet version are scheduled for late 2021. A supervisory council is now being created with members from SCAC and S7 Group for further streamlining the programme’s development.

Management of Russia’s second largest airline has explained that it opted for the shortened version of the SSJ when Embraer discontinued its similar-capacity E170 model. S7 Airlines, which currently has 17 Embraer E170s in its fleet, needs such aircraft to support its extensive effort to develop a nation-wide regional route network.

The SSJ75 project, launched in February 2018, has gained momentum with the interest from the launch customer. The R&D team involves several high-profile scientific institutions, such as the Central Aerohydrodynamic Institute (TsAGI), the Russian Aviation Material Scientific Research Institute and the National Aviation Technology Institute.

The SSJ75 size-optimisation task is coupled with a structural weight reduction effort with the added objective to utilise Russian-made components whenever possible. The shortened fuselage configuration will remain largely unchanged, but the weight is expected to be reduced by 10-15 per cent through broader use of composite materials, along with a targeted 10 per cent improvement of aerodynamic efficiency, all of which would lead to a five per cent reduction in fuel burn. The reduction of direct operating costs and after-sales support costs is another objective for the programme.

The modified version is expected to require a shorter wing, an upgraded flight deck, and a new avionics suite complementary with another Russian-made aircraft, the next-generation MC-21 narrowbody.

The decision on which powerplant to opt for is still being discussed, with several options, including a modified version of the SSJ100’s current SaM146 produced by Russo-French joint venture PowerJet, and United Engine Corporation’s (UEC) PD-7 and Pratt & Whitney’s PW1200G.

United Aircraft Corporation (UAC), SCAC’s parent company, assesses the Russian market for the SSJ75 will be between 200 and 300 units, whilst global market demand may reach a total of some 3,000 aircraft.