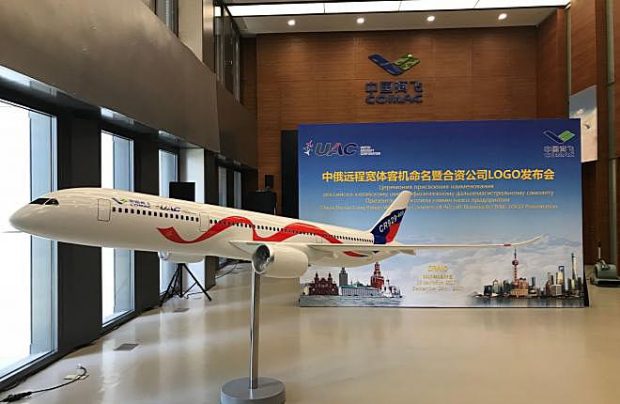 The CR929 wide-body airliner project was launched in 2017 with no forward orders :: UAC

The first firm orders for the Sino-Russian CR929 long-haul wide-body airliner – a project being created by the China-Russia Commercial Aircraft International Corporation (CRAIC) co-operation – will emerge only after initial flight tests, believes Oleg Bocharov, Russia’s deputy minister of industry and trade, who is also chairman of the joint venture’s board of directors.

The Russian half of CRAIC, which was set up in 2017 by China’s COMAC and Russia’s United Aircraft Corporation (UAC), previously revealed that the maiden flight of the new aircraft was expected in 2023.

The official Russian words contradict those of Yang Yang, COMAC’s deputy director of marketing and sales, who insisted on April 16 at the Asian Business Aviation Conference and Exhibition (ABACE) in Shanghai that the first orders for the CR929 are likely to be booked by the end of this year. According to Yang, several dozen orders are expected from Chinese, Russian and even European companies.

Although he has not named potential customers, the previous experience of placing orders for the first two civil aircraft produced by COMAC – the ARJ21 regional jet and the C919 narrow-body aircraft – indicates that potential candidates may be subsidiary lessors of China’s state banks.

In turn, Bocharov said that state-controlled Aeroflot, Russia’s largest airline, along with China’s state-owned carriers, could be the first CR929 customers. However, he added that it was too early to expect firm orders this year, since the programme is currently at the Gate 3 phase, which covers general layout approval and the analysis of technical commercial proposals submitted by potential suppliers of key systems, including engines. This phase is due to be completed this year.

According to Bocharov, proposed firm requirements for the new aircraft could be received from potential customers this year, with some perhaps specifying their demands at the MAKS-2019 air show, which is being held at Zhukovsky in late August and for which China is the official partner country. The show will feature a dedicated pavilion in which full-size mock-ups of the three parts of the CR929 fuselage and technologies used for its design will be demonstrated, the Russian official reveals.

The CR929 development started in 2017 with no forward sales orders, as was the same for the ARJ21 and C919 projects. Initially, deliveries of the first joint aircraft were scheduled for 2027. Then, in June 2018, COMAC moved the date of the first delivery to 2025. Five months later, UAC president Yury Slyusar responded that a 2025 start of deliveries sounded too optimistic, although he assured that the first flight would definitely take place in 2023.

The basic version of the CRAIC CR929-600 airliner is capable of carrying up to 280 passengers in a typical three-class configuration over a maximum range of 12,000 km. The fuselage length of the advanced aircraft is almost identical to that of the Airbus A330-900, however its cross section is much wider and is sized for nine- rather than eight-abreast economy seating.

Bocharov explained that the CR929 would definitely have a composite wing, which would increase its operational efficiency. COMAC has insisted on using Chinese materials for this component. “We support this decision,” Russia’s deputy minister said.