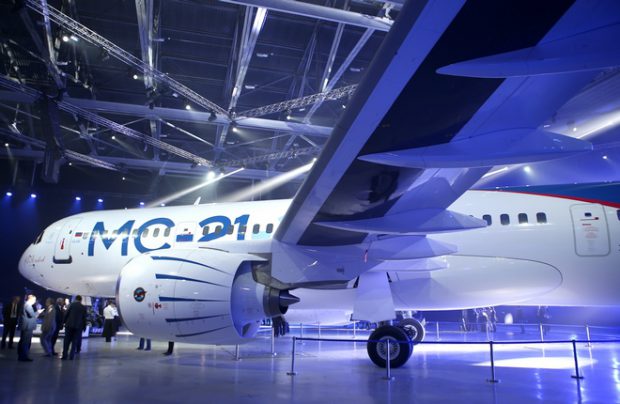 The list price for the advanced MC-21-300 narrow-body airliner, which is currently being developed by Russian aircraft manufacturing specialists, has been disclosed as an attractive US$96.1 million, Yury Slyusar, president of lead manufacturer United Aircraft Corporation (UAC) has revealed to Vedomosti business daily.

The head of UAC has also indicated that MC-21 operators could save as much as $2 million a year on lower operating costs compared with equivalent new Airbus A320 and Boeing 737 models.

Although the backlog for Russia’s would-be flagship commercial airliner project has remained unchanged for several years at 175 firm orders, Slyusar is nevertheless confident that number is sufficient to justify the launch of serial production. The aircraft production rate will accelerate from an initial 10 units per year to 70 aircraft by 2025, it is predicted.

Since the autumn of 2017, United Aircraft Corporation, which is now the official cornerstone of Russia’s major fixed-wing aircraft manufacturing initiative, has been undergoing a major restructuring process whereby companies associated with Russian commercial aircraft production are aggregated around the MC-21 project’s Irkut planemaker. The new subsidiary will eventually unite Irkut with Sukhoi Civil Aircraft (SCAC), Yakovlev Design Bureau, Aerocomposit, the UAC Aggregation Centre and UAC Capital. The complicated process of this multi-stock transfer into a single share entity is expected to be complete by the end of 2019.

In the meantime, it has been revealed that a massive investment of some 100 billion rubles (US$ 1.5 billion) is required to upgrade the technical capabilities required for MC-21 production at the Irkut Aviation Plant, the Ulyanovsk Aviation Plant and Voronezh Aircraft Production Association (VASO) centres. Approximately 17 per cent of the total fund – injected largely by allocations from the federal budget – was spent by the end of 2017 and the Russian government has promised to devote additional funds to help those companies willing to organise MC-21 maintenance centres.

The MC-21 family will include the163-seat MC-21-300 base model, as well as a shortened MC-21-200 version with a seating capacity for 132 passengers, and a stretched 212-seat MC-21-400 variant. Although the latter project has been suspended for some time, in his interview with Vedomosti, Yury Slyusar for the first time iterated that there is an emerging demand for the stretched version – as the market is now moving towards higher capacity, efficient aircraft.

The MC-21-400’s Airbus competitor, the A321neo, has already made its debut in the CIS and Russian marketplace, with service initiations at Russia’s number two carrier S7 Airlines and Kazakhstan’s flag carrier Air Astana. Also, Ural Airlines has several of the type on order.

Aeroflot, the MC-21’s launch customer, is to take delivery of the first of its batch of 50 aircraft in the first quarter of 2020. UAC is also counting on Irkutsk-based IrAero and regional start-up Azimuth Airlines to join the party, and is currently in negotiations with Utair. All said carriers currently have Russian Sukhoi Superjet 100 (SSJ100) regional airliners in their fleets.