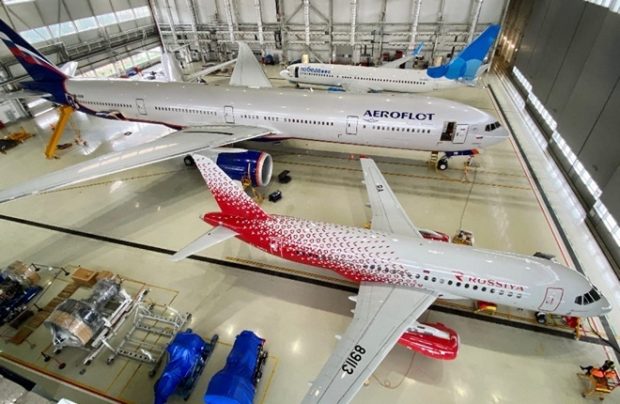 Western sanctions have seriously challenged technical operation of civil aircraft for Russian airlines – but no matter what, flight safety remains top priority for the industry. The system of continued airworthiness in Russia has not become compromised in any aspect. It rests on the solid foundation of federal regulations elaborated from ICAO standards and recommended practices (SARPs). Through decades these requirements have been fine-tuned and adapted to the local operational environment, in some respects making them stricter than elsewhere.

In mid-March, as an immediate response to the decision of several aviation rosters to cancel airworthiness certificates of Western aircraft operated by Russian airlines under their jurisdiction, Russia’s Transport ministry claimed that flight safety in the country will not degrade. Transferring such aircraft into the Russian register (under Federal regulation 56-FZ) enabled Russian authorities to issue national airworthiness certificates thus taking full responsibility and airworthiness oversight functions for these aircraft.

“Approval of airworthiness certificates is granted in full compliance with the norms of international as well as national air law,” Transport ministry reminds. “All aircraft are in airworthy condition, and undergo relevant maintenance checks according to their respective maintenance programmes.”

Thus, the change is a formal change of jurisdiction – as actual works for continued airworthiness of aircraft leased by Russian airlines were – and continue to be – conducted in Russia, by qualified Russian organizations and specialists with competence and authority to evaluate technical condition of aircraft.

Maintenance organizations are regularly audited by the nation’s aviation regulator to verify their compliance with local standards – as well as each aircraft is individually checked by authorized specialists. The result of such inspection is always individual, thus airworthiness certificates may not be revoked from a group of aircraft, under a single resolution. Cancellation of airworthiness certificates of all aircraft by some jurisdictions is not based on any legal or actual basis.

The largest maintenance provider in the region

Aeroflot moved forward with the effort to radically build up the Group’s MRO capabilities and competencies by merging Aeroflot’s own technical department with of its fully-owned maintenance subsidiary A-Technics.

Founded in 2015, A-Technics holds Rosaviatsiya’s FAP-285 approval for maintenance of both Western- and Russian-made aircraft, as well as FAP-21J certificate, which enables it to develop documentation for production of several components for all aircraft types. A-Technics performs line and base maintenance of Boeing (737, 747/747F, 777), Airbus (A350, A330, A320 family) and Superjet 100 (SSJ 100), being the only organization in Russia capable of heavy checks on Boeing 747 and 777 (up to eight years C-checks), as well as base maintenance of Airbus A350.

Besides taking care of the fleet of airlines, which make up its parent Aeroflot Group (Aeroflot, Rossiya and LCC Pobeda), A-Technics offers services to other Russian carriers. In 2021 its manhours exceeded 1.5 million, a 22% increase on the previous year.

Since July, production facilities and human resources of Aeroflot’s technical department are being transferred to A-Technics, the process is expected to complete before the end of the year. As a result of the merger, A-Technics will evolve as Aeroflot Group’s center of competence for continued airworthiness – but also as the largest maintenance organization in Russia, the CIS and Eastern Europe, both in terms of capacities and the range of aircraft on its capability list. A-Technics will operate six hangar complexes servicing simultaneously 19 aircraft of various types. Besides hangar facilities in Moscow’s Sheremetyevo and in Orenburg, A-Technics operates line maintenance stations at Aeroflot Group’s regional hubs, Sochi and Krasnoyarsk, as well as Belgorod, Voronezh, Nizhny Novgorod, Saratov and Stavropol.

“Holding structure, whereby a large airline spins off its maintenance division into an independent company, is a widespread international practice. Such entity not only maintains its parent airline’s fleet, but caters for third party airlines as well, generating additional income for the holding. At the same time, outsourcing maintenance activities to subsidiary saves costs for the airline. By marketing its services to other carriers, such maintenance provider ensures constant capacity utilization and has greater opportunities for expanding its capabilities”, Mikhail Korobovich, A-Technics’ general director explains.

Decades of experience, established quality management system, professional engineering and technical staff and solid material resources are at the core of Aeroflot’s continued airworthiness capabilities, allowing it to ensure safe and efficient aircraft operations and to continue developing in line with the new realities.

What can’t be cancelled

It’s important to note that up until the moment when Aeroflot’s aircraft were transferred to Russian jurisdiction, A-Technics was fully audited by international regulators, including EASA. As recently as in February 2022 all A-Technics’ bases successfully passed their planned EASA audit, and based on the results the regulator awarded its approval for one year to the company, confirming the provider’s competencies and full compliance with international standards.

Having checked the entire operations of A-Technics across all its stations, divisions and departments, staff qualification and documentation, EASA did not identify a single case of incompliance with Part-145 requirements.

Within the framework of the latest audit, A-Technics obtained approval for cadmium coating of aircraft parts for corrosion protection. The provider purchased all necessary equipment and trained its staff.

Successfully passing EASA audit, for the seventh year in succession, A-Technics confirmed it is fully compliant with the highest safety requirements for MRO organizations. The first Part-145 approval from EASA was received in March 2016 and continuously expanded it with new aircraft types and the scope of operations. The provider was approved for the entire range of maintenance work on Boeing 777, Boeing 747, Boeing 737NG and Airbus A320 registered in Europe, up to C-checks.

Besides, to maintain Bermuda-registered aircraft, the company has had BCAA (Bermuda Civil Aviation Authorities) OTAR Part-145 Option 2 certificate. In December 2021 A-Technics expanded its Airbus A350 certificate up to 1B-check inclusive.

Developing in the new reality

In March 2022 A-Technics was approved by Russian aviation authority Rosaviatsiya for maintenance of Western-built aircraft registered in Russia. The approval was granted on the basis of a comprehensive audit by Rosaviatsiya leading to extension of the company’s FAP-285 certificate to include Boeing and Airbus aircraft.

A-Technics won its first FAP-285 approval in 2018 for maintaining Russian-built Superjet 100 aircraft. The extended certificate allows the company to cater for continued airworthiness across entire fleet of Aeroflot Group airlines – Boeing 737NG, 777, 747-400; Airbus A320 family and Airbus A350. In May A-Technics added approval for heavy checks on Airbus A330 to its capability list, which had already included line maintenance for the type.

“In A-Technics we have elaborated an efficient and absolutely transparent quality management system, which guarantees complete oversight of all works done within maintenance checks and repairs. This systems took years to fully develop and it has proven its efficiency and has enabled the company to successfully pass both Russian and international audits. A-Technics has every asset to ensure continued airworthiness of Aeroflot Group’s fleet – highly qualified personnel, vast experience, in-depth knowledge of all aircraft in operation and all necessary equipment,” assures Mikhail Korobovich.

The company continues to expand its competencies. In May Sochi line station won Rosaviatsiya approval for A320 family aircraft powered by V2500 engines. Now the station can offer maintenance services to third operators of the type, as all of Aeroflot’s A320s are equipped with CFM56, for which the approval had been granted earlier. This addition allows the station to provide maintenance up to weekly checks, including arrival and departure inspections, defect rectification, airworthiness directives (ADs), structural repairs etc.

In June same line station in Sochi added Boeing 747-400 to its capability list. With the summer season still in full swing, the station has been using its extended FAP-285 approval to service aircraft in Sochi.

From maintenance to manufacturing

In June A-Technics won approval of Russian aviation authorities for developing documentation for production of a number of components for any type of aircraft, Western- or Russian-built.

These parts will be produced jointly with partners, which hold FAP-21G certificate for component manufacturing – or at the premises of A-Technics under its own FAP-285 approval. The company has outfitted the necessary facilities and formed two new divisions – design department and aviation component certification department, led by the most experienced specialists.

“Obtaining FAP-21 certificate is a milestone in company’s consistent development and expanding our competence in aircraft MRO. It means new opportunities, as well as bringing a solution to some burning issues of producing some components, while under Western sanctions,” Mikhail Korobovich explains.

Besides that, as a result of an audit the provider was approved to launch a facility for passenger seat repairs at its Moscow Sheremetyevo hangar complex. It will overhaul passenger seats and replace unserviceable components. Earlier passenger seats were repaired by specialized organizations outside Russia.

To enhance its quality management system and automation A-Technics has initiated introduction of mobile application for control and keeping record of all operations done by its staff. The new resource was developed in-house by provider’s own IT team to create a single point for automated collection and processing of data during quality control activities.

The application works on tablets handed out to all staff and allows for instant control of all works associated with aircraft maintenance as well as monitor specialists’ knowledge of aircraft operations, and correct attribution of aircraft documentation, technical condition of special equipment and tools, validity of staff certificates. The application provides information to department managers on the results of inspections.