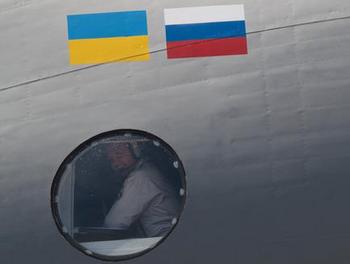 Russia will close its airspace to Ukrainian airlines from October 25, 2015, the Russian Transport Ministry says in a statement, in a direct responce to Ukraine’s desion to ban Russian carrier there. Until that date, the Federal Air Transport Agency is to send out formal notices to all Ukrainian carriers operating or planning to operate flights to Russian destinations, informing them of the ban.

There are currently only three Ukrainian carriers flying to Russia: Ukraine International Airlines (flies from Kiev to Moscow, St. Petersburg, and Kaliningrad), Dniproavia (Dnipropetrovsk to Moscow), and Motor-Sich (Zaporizhia to Moscow).

According to the ministry, the ban was prompted by similar Ukrainian sanctions against Russian airlines flying into the country from October 25, which was announced on September 25 by the Ukrainian aviation authority. Notifications to that effect have been sent to, and received by, Aeroflot, Transaero, Rossiya, and Globus (an S7 Group subsidiary).

A total of 25 Russian airlines were thus blacklisted by Ukraine. Commenting on Ukrainian President Petro Poroshenko’s decree, Russian Transport Minister Maxim Sokolov said he had no other choice but to take reciprocal measures.