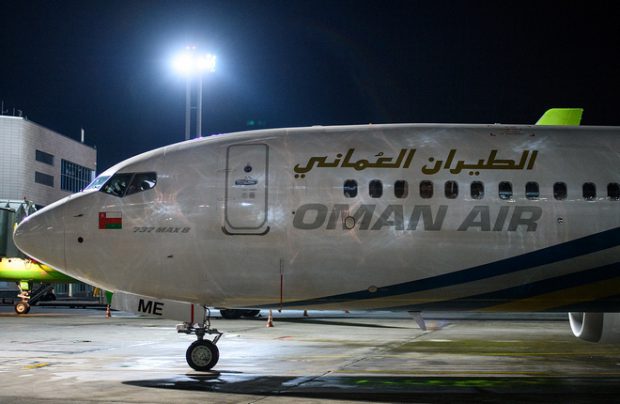 Oman Air, the flag carrier of the Sultanate of Oman, has commenced new direct air services between Oman and Russia, with its first flight departing Muscat Airport to Moscow Domodedovo Airport on 30th October.

This new daily rotation is being serviced by a Boeing 737MAX-8 aircraft, configured with 162 seats in a two-class layout, with 12 in business and 150 in economy.

The new service means that Moscow is the first destination for Oman Air in the countries of the Commonwealth of Independent States. “Russia is an increasingly important destination from Oman, and since we announced this route earlier in the year, we have seen strong interest, both from Oman travellers and from customers transiting our Muscat hub,” asserts Abdulaziz Al Raisi, chief executive of Oman Air. “Connecting Muscat with Moscow, we expect this daily service to further stimulate economic, trade and business relations between the two friendly countries. Trade between Oman and Russia continues to rise and we are happy to be able to facilitate this further with the start of this service,” he adds.

Paul Starrs, chief commercial officer of Oman Air, explains that the airline’s choice of Domodedovo airport is a product of its intention to develop a close partnership with Russia’s third largest carrier S7 Airlines. Currently the two airlines have a jointly agreed Special Prorate Agreement (SPA), with a view to extending it into a code-share arrangement, once the cooperation has proved its success.

The Omani airline believes that, apart from strengthening and opening up new business opportunities between Russia and Oman, these flights “will also open the gates [to Oman] for Russian tourists,” says a statement. Oman Air is also hoping that Russian travellers will transit Muscat, and use its flight network to a variety of further onward options, including 11 Indian destinations, in addition to neighbouring Indian Subcontinent resorts such as the Maldives, Nepal and Sri Lanka.

To exploit the increase in demand for direct leisure travel to the sultanate, Russia’s Nordwind Airlines launched charter services to Oman in mid October, with twice-weekly direct flights from Moscow’s Sheremetyevo to Salalah, the second-largest city in the sultanate. On behalf of Pegas Touristik, its parent travel company, the services are operated using a Boeing 737-800.

Meanwhile, the demand for travel to Oman from Russia is expected to further increase as, from March next year, Russian tourists will be able to obtain entry visas either upon arrival at the Omani airports or, ahead of travel, process them online.

The new service between Moscow and Muscat is the third route launched by Oman Air this year, following on from Istanbul and Casablanca, and is part of Oman Air’s gradual network expansion programme.