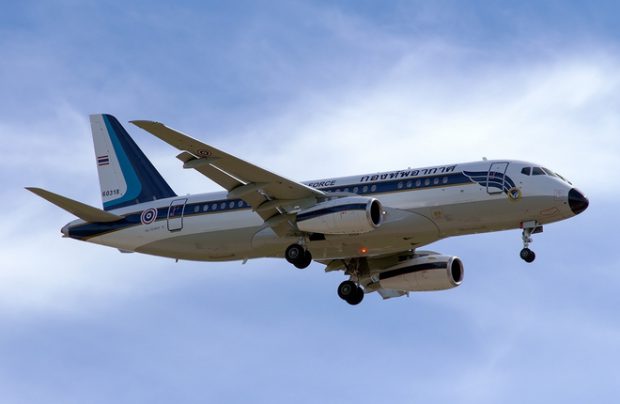 The Royal Thai Air Force (RTAF) signed a contract with Sukhoi Civil Aircraft for the delivery of another Sukhoi Business Jet (SBJ), a VIP version of Sukhoi Superjet 100 regional jet. This aircraft will join the fleet of the Royal Air Force in 2018, reported SuperJet International, a Russo-Italian joint venture, responsible for the aircraft customization.

This will be the third SSJ 100 in VIP configuration ordered by RTAF. The first two aircraft of the type under the previous contract were delivered to Thailand in July 2016. They have passenger cabin with three areas: 4-seat VIP area, 6-seat business area, and standard area accommodating 50 passengers.

The third aircraft will have greater capacity, up to 73 passengers, including four VIP passengers. It will be delivered in a two-cabin layout with common zone for VIP and business class and. The aircraft’s operating range is more than 4500 km.

To date, Sukhoi has delivered 111 aircraft to several customers in Russia, Central Europe, Central America and Southeast Asia. Eight of them are either in the business configuration (Sukhoi Business Jet) or tailored for special purposes: air hospital for EMERCOM and for border aviation regiment.