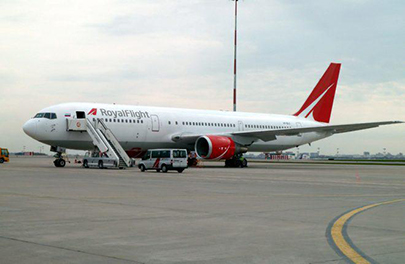 Royal Flight, the Russian charter carrier formerly called Abakan Avia, took delivery of a Boeing 767-300ER, on April 27. The aircraft, the first wide-body type for Royal Flight, was ferried to the airline’s base airport, Moscow’s Sheremetyevo, to join its fleet of a single Boeing 737-800 and five Boeing 757-200s. The wide-body had its registration changed to VP-BLC after its release by its previous operator, Rossiya – Russian Airlines.

The 767-300ER is scheduled to perform its first revenue flight from Sheremetyevo to Phuket, in Thailand, on April 30, CEO Besiki Kvirkviya has told Russian Aviation Insider. A second of the type, also previously operated by Rossiya, is expected to be delivered between May 10 and 15. Kvirkviya says there are no immediate plans to further expand the company’s 767 fleet.

Both 767-300ERs are owned by Dutch lessor AerCap, and come in a 309-seat two-class configuration, seating 12 in business and 297 in economy.

According to the Federal Air Transport Agency (FATA), Royal Flight carried nearly 92,000 passengers in Q1 2016, 21st among Russian airlines (up 5.4% year-on-year). The average distance flown per passenger over that period amounted to 5,338 km (up 30.6% from Q2 2015’s 4,088 km). The airline’s seat load factor grew 6 percentage points to 95%, securing Royal Flight the second position among the 35 top carriers in the country.

Royal Flight performed its first revenue flight in March 2014, with a Boeing 757-200. The charter carrier’s primary customers are tour operators Coral Travel and Sunmar, both controlled by Turkish international holding company OTI. The airline itself used to be an OTI subsidiary until September 2015.

Royal Flight is currently in talks with Russian lessor Ilyushin Finance Co. (IFC) to lease an Ilyushin Il-96-300 wide-body with no confirmed delivery date, an IFC representative has confirmed for Russian Aviation Insider. The airline was not immediately available for comment. Ilyushin Il-96 in question, with the registration RA-96011, was previously operated by Aeroflot (Photo by Wikimedia)

The airliner in question, with the registration RA-96011, was previously operated by Aeroflot. According to open sources, the aircraft first flew in 1994. IFC had originally planned to lease it to Cubana de Aviacion, and had even written a preliminary agreement with the Cuban carrier.