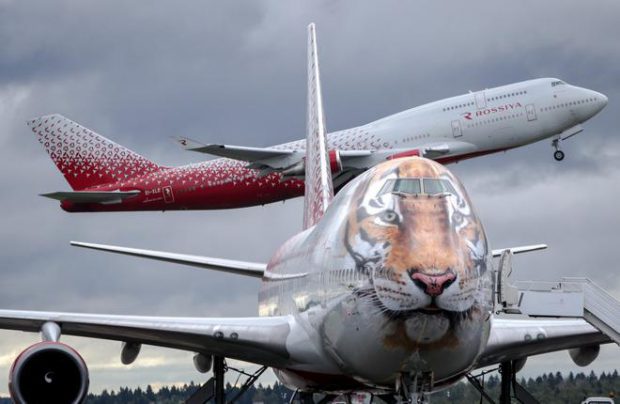 Rossiya Airlines, part of Aeroflot Group, has taken delivery of a Boeing 747-400, the sixth of the type in the airline’s fleet. The GE CF6-80C2B-powered aircraft is fitted with 522 seats, with 12 in business class and 510 in economy. According to Rossiya, the aircraft, with tail number EI-XLD, took its first commercial flight with the carrier on September 11.

This was the first 747 that the carrier has leased through VEB Leasing. All 747s received before this had been provided by Sberbank Leasing. All Superjumbos previously flew with now-defunct Transaero.

This particular 747 has been pained into unusual livery, with the image of a tiger’s face on the aircraft’s nose. Rossiya has revealed that the painting was carried out in Italy, at the site of Alitalia’s maintenance service, in Rome.

The project was carried out in cooperation with the Amur Tiger Center, a reasearch and conservation organization founded in 2013 by the initiative of President Vladimir Putin.

Rossiya is set to receive three narrow-body Boeing 737s, which were also a part of Transaero’s fleet, according to the airline’s representative. Currently, Rossiya operates 6 Boeing 747s, 32 Airbus A320 family aircraft, 15 Boeing 737s, and 4 Boeing 777s.