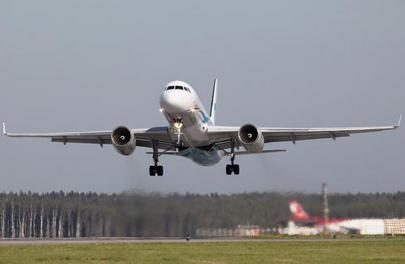 The Tu-204-300 will be reconfigured to VIP version and receive auiliary tanks (Photo by Fyodor Borisov / transport-photo.com)

Russian defense export holding Rosoboronexport has agreed to buy a Tupolev Tu-204-300 aircraft from the Ilyushin Finance Company. The long-haul aircraft (tail number RA-64039) was manufactured in 2005 and previously flown by Vladivostok Avia, which ceased operations in 2014.

The recently acquired Tu-204 will be used for corporate transportation and will be registered in the Air Operator Certificate of Cosmos Airlines, which now operates a fleet consisting of an An-12 and three Tu-134s.

The deal amount is estimated at 2.44 billion rubles (31.7 million dollars), which also covers the cost of modernization; the aircraft will be equipped with auxiliary fuel tanks to extend its range to 10,000 km, while the cabin will be reconfigured from the original version’s capacity of 210 seats into a corporate/VIP version for 20 to 25 passengers. According to the contract, the cabin should accommodate 22 passengers, with the condition that there be 18 sleeping berths. The document does not provide information on where the upgrades will be performed, but they most likely will be performed at Aviastar-SP in Ulyanovsk. The upgraded aircraft should be re-delivered within 18 months from the date the agreement is signed.

After Vladivostok Avia suspended its operations, Ilyushin Finance reclaimed six of its Tu-204-300s. Further operation of these aircraft is still being negotiated, the company’s representative told Russian Aviation Insider. Two aircraft of the same type fly for Rossiya, a specialized air squadron in the interests of the Russian government.