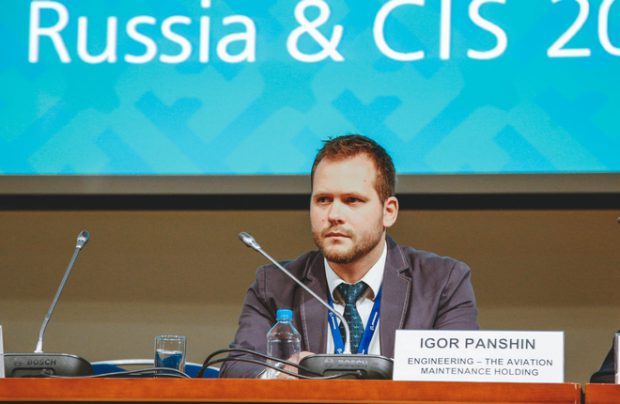 Engineering Holding, the leading MRO provider in Russia and the CIS, is planning to expand its scope of operations by taking part in aircraft production programs. Deputy General Director Igor Panshin spoke with Russian Aviation Insider about the company’s potential contribution to aircraft manufacturers, and about the current shape of the Russian MRO market.

– How would you describe the niche occupied by the Russian MRO sector on the global market?

– Let me begin by saying that the Russian civilian aircraft MRO sector is currently focused on servicing Boeing and Airbus airliners. The sector started acquiring its current shape relatively recently, when the first deliveries of these aircraft began to Russia.

It is important to understand that ten years ago the Russian MRO industry made its first steps toward servicing Western-made aircraft types. It was not until the early 2010s, i.e. around five years ago, that the Russian sector began gaining a reputation with foreign airlines. In other words, our sector is still too young for its role to be assessed on a global scale. It is a very young market.

– Could you perhaps assess the size of this market then?

– If we are to speak exclusively of passenger jetliners, there are slightly under 1,000 such aircraft in Russia and the CIS at the moment. This is a sizable figure, but of course it cannot compare to the fleets operated in Europe or China. Engineering Holding has recently run an analysis of how the passenger airliner fleets are developing in our region. Our estimate is that the size of the Russian and CIS mainline fleet will reach around 1,400 airframes five years from now, as old types are being retired and new ones get delivered.

The number of aircraft in operation is the driver of the MRO market. On the other hand, the figure should be corrected to omit the aircraft whose operators have in-house MRO capacities, such as Aeroflot, Ural Airlines, UTair, and others.

Nevertheless, despite some of the airlines having in-house capacities, our analysis indicates that the MRO market will be growing, and such providers as S7 Engineering, Sibir Technics, Ural Airlines’ MRO base, A-Technics, Volga-Dnepr Technics Moscow, Tulpar Technic, and others will have to gain expertise servicing new types of airliners.

At present, Engineering Holding holds slightly over 50% of the available Russian MRO market (for the exception of the S7 Airlines fleet). By the available market I mean the overall number of base maintenance checks which get offered for tender, meaning that they are not performed by carriers themselves but rather outsourced to third-party providers.

Therefore, slightly under one half of the market is served by foreign MRO providers and, to a smaller extent, by other Russian MRO specialists.

For the Russian MRO sector in general, and for our company in particular, to keep increasing their share, we need either the emergence of new market players or further expansion of the existing providers’ capacities. Otherwise, more and more work will be outsourced abroad.

– Would you say that Engineering Holding’s maintenance bases are full-fledged elements of the global MRO infrastructure?

– If we are to mark MRO centers in red dots on a map of the world, then our company will be a full-fledged red dot. There is, however, a network of mutual relations that took decades to evolve. Why would West European airlines, for example, further complicate this network if they already have established contacts with MRO providers?

When analyzing our capabilities as applied to potential new clients, we proceed from how convenient it will be for the customer to use our services.

To make our services convenient for more customers, we need to open bases elsewhere.

– Could Engineering Holding follow in the footsteps of Volga-Dnepr Technics, which has hangar facilities abroad?

– We are looking at such a possibility, and even have certain plans in this respect. This is the right path to take, but first we need to know what we are going to do, and why.

– In 2016, Engineering Holding in conjunction with global market leaders started servicing CFM56 engines and Zodiac Aerospace lavatories in Moscow. You will shortly open the TAT Engineering joint venture in the town of Tolmachevo, which will be repairing heat exchangers. One gets the impression that your company is gearing up for a major leap.

– It is our belief that a contemporary MRO provider should be more than just an aircraft repair shop. The major players оn the MRO market are increasingly integrating into the airworthiness maintenance system.

We have the production capacities to begin manufacturing and mass-producing metallic and plastic components in the near future. We are prepared to engage in machining, metal-working manufacturing, and even foundry casting.

In the next 12 months we are planning to be actively discussing this topic, and also the aircraft customization, along the lines of what Venice-based SuperJet International is doing. We are prepared to install aircraft interiors, retrofit and paint airliners.

We believe this would simplify the task of Irkut Corporation, for example, allowing it to increase the annual output of MC-21 airliners because the production facility would not have to allocate its own resources to customize each airframe for the specific customer.