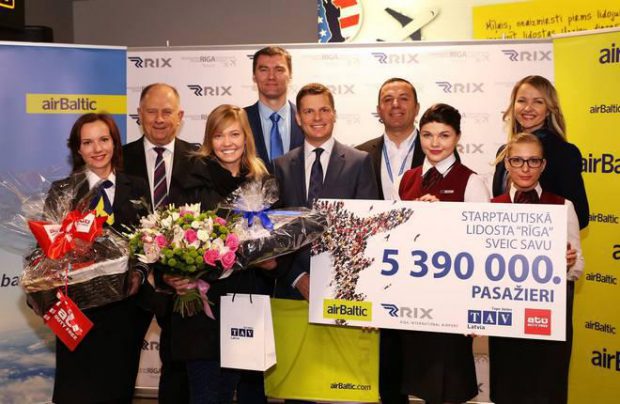 On 28 December, Riga airport, in the Latvian capital, achieved a new passenger traffic record exceeding the threshold of 5.3 million passengers since the beginning of 2016. Last year the airport handled 5.16 million passengers.

More than half of the passengers of Riga airport were carried this year by the Latvian national airline airBaltic, commented Arnis Muiznieks, director of aviation department in the country’s ministry of transport. “The recent ambitious investments in the Airport infrastructure, upgrading the airfield and improving passenger service facilities, have made Riga even more attractive to both airlines and travelers,” he explained. airBaltic serves direct flights from Riga to 60 destinations.

According to the airport, London, Moscow, Oslo, Frankfurt and Helsinki are the most popular destinations from Riga this year.

Normunds Feierbergs, member of the board of SJSC Riga International Airport confirmed the company plans further improvement of the passenger terminal to meet the growing passengers traffic. He mentioned the expansion of the check-in hall, the baggage claim and sorting areas, security control area, as well as construction of a multi-storey car park and connection to the newly built railway station.