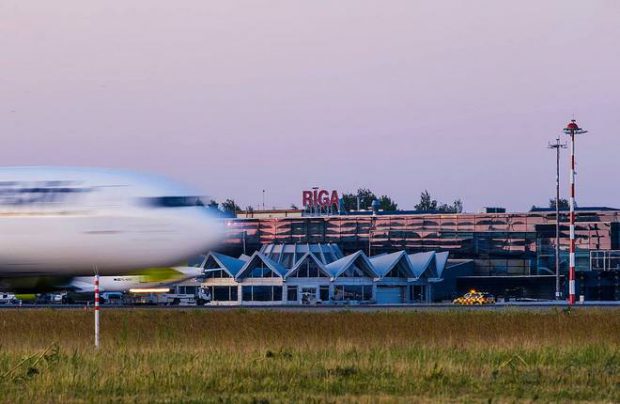 The largest airport of the three Baltic nations handled 7.8 million passengers in 2019 and is anticipating further growth (Riga airport)

Riga airport (IATA code: RIX), which serves Latvia’s capital city and is home to airBaltic, the region’s largest airline, enjoyed a 10.5 per cent growth in passenger numbers last year. With the total of passengers handled in 2019 exceeding 7.8 million, the airport is the leading player in the three Baltic states of Latvia, Estonia and Lithuania. In total last year, the airport handled 87,000 flights, a 4.2 per cent year-on-year improvement.

“2019’s operational results indicate that the air travel market of the Baltics is becoming too small for the airport, hence the decision to reach for a wider competitive field on the international scale and become a growing aviation hub for northern Europe,” comments Ilona Lice, Riga airport’s chairwoman of the board. She also notes that, in the third quarter of last year, Riga was rated Europe’s fifth fastest-growing airport in the five-to-15 million passengers category by Airports Council International (ACI).

Base hybrid carrier airBaltic was accountable for some 58.5 per cent of the airport’s total traffic in 2019, with European low-cost carriers Ryanair (13.4 per cent), Wizz Air (7.7) and Norwegian (3.9) the next three largest contributors – a statistic which shows that hybrid and budget carriers collectively served 83.5 per cent of passengers using the Baltic region’s largest airport.

In the same period, Russia’s Aeroflot served 2.8 per cent of passengers traveling through Riga, making it the fifth largest contributor among a total of 20 airlines that fly to the Latvian capital.

The airport also emphasises its 19.4 per cent growth in transfer traffic last year during which 2.4 million passengers (30.4 per cent of the total) used Riga as a connecting point to continue their travel utilising the airport’s route network, which features more than 100 destination options in the summer schedule and 70 in the winter season.

For this year, in the 2020 IATA summer schedule, airBaltic is adding a sixth Russian destination to its network whereby Yekaterinburg will complement its existing flights to Moscow, St Petersburg, Kaliningrad, Sochi and Kazan. In 2019 the airline carried 16 per cent more passengers between Russia and Latvia than it did in 2018.

“To win new markets we are continuing to expand our long-haul route network, both in the passenger and freight segments. We’re targeting the markets of the USA as well as China and other countries in Asia,” points out Ilona Lice, adding that last year’s effort of launching scheduled freighter flights from China has been a success.

Developing its freight business remains one of Riga’s main priorities, according to Lice. Last year the airport launched the construction of a new apron for accommodating freighter aircraft, which will double the airport’s cargo processing capacities. Securing a contract with DHL for a state-of-the-art logistics centre is expected to further promote Riga as the largest freight-handling airport among its Baltic neighbours. In 2019 the airport processed some 27,300 tonnes of cargo, more than a half of all cargo volumes currently shipped by air in the Baltic states.

Gearing up for future overall growth, Riga airport has launched a major development project that includes the expansion of its existing passenger terminal to raise its annual capacity potential to 12 million passengers and a connection to a railway station for improved accessibility.

The project is to be undertaken by a trio of companies that won the 2019 tender, namely Italy’s One Works and Sintagma and the local design bureau Vektors T, with the launch of construction scheduled for 2021. This year the airport plans to concentrate on increasing its operational efficiency and automation, whilst also initiating the measuring of its performance according to Global Reporting Index (GRI) standards – “to improve its business transparency and confirm a commitment to sustainable long-term development.”